Harriet is Rushed to Hospital after suffering a Seizure 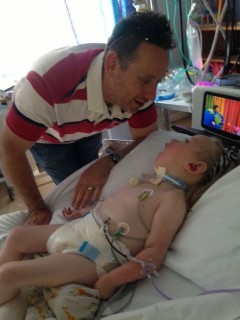 It was just after 5.00 am on Saturday 29th June 2013, when Harriet`s Saturation monitor alarmed, at a glance I could see that her oxygen levels were dropping and quickly went over to find out what was wrong. Initially I noticed that Harriet had alot of mouth and tracheostomy secretions, which was not out of the ordinary for first thing in the morning and therefore started to suction her airways.

It was a still quite dark in the room, Harriet was light sensitive and ordinarily I would not turn on main lighting as this would scare her, but I had to know what was wrong and turned on the main lights in the room.

As I looked at Harriet, something seemed seriously wrong; my little girl did not recognise me and was unable to move her head or her eyes. I tried to move Harriet`s head and communicate with her, but she did not respond in any way, all I could here was a clicking sound, which sounded like a relay clicking or a record that was stuck on the same track.

My heart sunk and I started to cry, as I felt I had lost all communication with Harriet and that she was now brain dead.

I shouted to Lesley, call the ambulance there something seriously wrong with Harriet and then quickly reached for the emergency oxygen bottle in order to try and increase Harriet`s oxygen saturation levels. The oxygen levels were not increasing as I would have expected and knew that Harriet needed to get to the hospital immediately.

The fast response paramedic arrived and started to evaluate Harriet as he was talking to me about her ongoing medical condition. I explained that Harriet had alot of neurological problems, but had not displayed anything like this before and I felt she was having some sort of seizure.

It seemed the paramedic was not sure whether Harriet was having a seizure, as she was not displaying all the characteristics or symptoms of a seizure.

The ambulance then arrived, but for some reason, he came without any support and was actually on his own. The fast response paramedic looked at him and asked him if he was on his own, to which he replied yes.

I was a bit taken back and worried that Harriet was going to deteriorate quickly, if she was taken to hospital soon. The fast response paramedic had to park his car outside the house and go in the ambulance with Harriet, Lesley, myself and the driver.

As we rushed to the hospital in the ambulance, under siren and blue lights, our worst fears seemed that they were coming to fruition; Harriet was starting to have some uncontrollable fit or seizure, which was very frightening to look at. The paramedic then gave Harriet an anti seizure medication that was supposed to help control the seizure, but this had no effect.

The ambulance saturation monitor was recording alarming desaturation levels of not only oxygen but also Harriet`s heart beat. Harriet`s sats suddenly disappeared from the monitor, the paramedic quickly started to oxygen bag Harriet to get her back and we were fortunate that Harriet was still breathing.

After what had seemed a lifetime, the ambulance finally arrived at the Derby Royal Children`s Accident and Emergency, Harriet was rushed into the emergency room, where a team of doctors and nurses were waiting for her. While the doctors were trying to establish what was wrong with Harriet, one of the nurses proceeded to cut Harriet`s top off with a pair of scissors. Harriet was now shaking uncontrollably and seemed to be getting worse by every minute that passed.

Everything seemed like a blur, I could not come to terms that Harriet may actually be dead within the next few minutes and found it hard not to cry.

After a good 20 minutes Harriet started to respond to a second anti seizure medication that was administered by one of the doctors, slowly the shaking stopped and her oxygen and heart saturation levels returned to a more normal reading.

Once Harriet was stable, the team transferred her to the Dolphin Intensive Care Unit, where she was once again wired up to the saturation machine and monitored closely for the next few hours.

A male consultant examined Harriet and confirmed that she has suffered a seizure, although he could not explain what had caused it and wanted to run some blood and urine tests. He said that he may also have to perform a lumber puncture test, before administering any antibiotics, as this would compromise the test.

In the afternoon Harriet was still suffering from a high temperature and a female consultant decided that it was important to get the lumber puncture done, as Harriet may be suffering from a serious brain infection like meningitis.

The consultant got all her equipment together and tried to perform the lumber puncture, on Harriet`s spine, but found that it was almost impossible to get any fluid from her spine, due to the scoliosis surgery she had in 2010.

It was then decided that Harriet needed to go onto an Intravenous antibiotic, while the consultant waited for other test results to arrive back on Monday morning.

We were both very concerned that Harriet was going to have another seizure while she was on the Dolphin Intensive care ward and that Harriet could possibly have seizures on a regular basis. We wanted to give the consultants as much information about Harriet, as we thought we could possibly find out what triggered the seizure.

I explained to the male consultant that Harriet had been getting extremely hot in the face at certain times of the day, over the last ten to twelve months and had been told by previous doctors and consultants, that this was simply Harriet teething. The consultant quickly dismissed this as Not being anything to do with teething and told us that in his professional opinion, there was no evidence to support or substantiate teething as causing problems with temperature. He did however explain that Calpol type medications will reduce temperature, as paracetamol resets or regulates the temperature part of our brain.

Over the course of the next few days, Harriet started to return back to her normal self, although she was still experiencing tiredness and large fluctuations in her body’s core temperature. Harriet was once again able to turn her head and interact with us in a way only Harriet could.

Today is Monday July 1st 2013; the consultants have arrived on their ward rounds. We were told that all the Blood culture tests were normal and that they have no clear understanding as to what caused Harriet to have such a massive seizure.

We were told that Harriet is well enough to go home as a her temperature has now come down, but we would need to administer special anti seizure medication, if Harriet displayed these symptoms again.

As we took Harriet home, we were both pleased she was out of hospital, but at the same time felt scared that Harriet could have another seizure without warning.

We will now contact Harriet`s consultant Neurologist - Dr.William Whitehouse at the Queen`s Medical centre in Nottingham, in order to try establish whether Harriet`s condition is getting worse or whether this was an isolated incident.

We would both like to thank the fast response ambulance man, the team of doctors and nurses in the children`s Accident and Emergency and all the consultants and nurses on the Dolphin Intensive care unit.

Harriet`s third seizure proved to be life threaten...
Professor Vyas gives us some hope for Harriet