Harriet is seen by the Genetics Clinic Nottingham 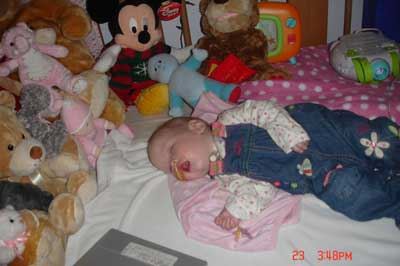 Harriet had been referred to the Genetics Clinic at Nottingham City Hospital to be seen by Mohnish Suri and his genetics  team , regarding Harriet`s development .

We arrived at the hospital at 11.00a.m this morning and had to wait a few minutes until we were seen by the consultant and were not sure what to expect  from  the team .

Harriet was initially examined for her over all development and Mr. Suri continually asked us questions about the things Harriet was doing at home, like could she hold her head up, was she reaching out for toys etc..

We told  Mr . Suri that Harriet did move about on her back, but was unable to hold her head up and reaching for toys was very hard for Harriet to achieve due to her problems .

Harriet has quite a large arch in her back that has become a lot worse over the course of the last few months ,  she has had to spend a lot of her time sleeping on her side , due her secretions being just too bad for her to lay on her back .

Mr. Suri was extremely concerned by Harriet`s curved back as this was causing problems with her breathing, her lungs were being pushed in and most of her internal organs were under a severe amount of pressure due to the curve in her back . He also explained that Harriet was developing a pigeon type chest that was a direct result of her back problem and said that Harriet would need to see a specialist back surgeon to see what the possibilities were of trying to correct this life threatening problem .

The genetics people  talked to us about the risks of Lesley having another child like Harriet, we were asked questions about both our families and whether there was the possibility of a gene being passed down from someone within one of our families. We explained that there was no one on either of our families that had any of the problems Harriet currently has .

Mr. Suri explained that to us that there was a possibility of Lesley having another child like Harriet and said there was between 5% - 10% chance of this happening again .  We were both devastated by this news but kept asking questions to try and find out more .

Mr. Suri  and  his team had not found anything wrong with Harriet`s chromozones or cell structure and therefore could not give us a definitive test that we could use to test for a similar pregnancy, he also explained to us that because Harriet has a problem with mylenation around her brain and that this would not show up in a new born until month`s after birth .

We both feel that the only hope for Harriet is stem cell treatment, but until we find out what is wrong with Harriet this seems a long way away and any company conducting stem cell treatment always asks whether the mother has had the umbilical cord frozen as the stem cells are a direct match that can be used without any ethical problems, although each country is regulated by their individual governments .