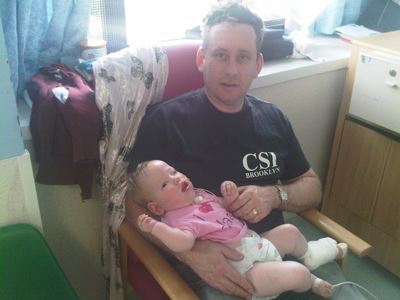 Over the course of the last few months Harriet has been experiencing episodes of twitching or jerking  for no apparent reason, these episodes seem to be slowly increasing on a daily basis and we have concerns that Harriet`s condition maybe getting worse.

We informed  Harriet’s  paediatric consultant Dr. Shiva Shankar at Derby  Children`s Hospital a couple of weeks ago as we were concerned that Harriet may be in pain and he said that Harriet would need an EEG to rule out the possibility of Harriet having a seizure or fit .

Harriet`s EEG appointment came through within a few days as there had been a cancellation and we took her to the appointment, the lady put probes onto Harriet`s head and started the video camera that would support any findings. Harriet was twitching and jerking during the EEG  scan, but it did not seem clear to us whether Harriet was having any form of fit and the lady that performed the test was unable to comment on the results as these needed to be read by one of the consultants .

We took Harriet home and a few days later she went bright red and seemed to lock up for over 15 seconds, we had seen this a few times with Harriet, but it normally happened during her having a bath and therefore we were quite concerned that the jolting movements had progressed into fits or seizures .

We phoned the Derby Children’s Hospital to try and speak to Harriet`s consultant, but were referred to one of the Hospitals registrars, we explained what had happened and the lady registrar asked us to bring Harriet into Accident and Emergency.

Our dilemma was that Derby Children’s Hospital had very limited knowledge regarding neurological problems and that if we took her there, that there was the possibility that they would just send her home without any treatment.

Harriet really needed to go to the Queens Medical Centre in Nottingham, as they had a ward dedicated to children’s neurological problems, but we knew if we called an ambulance that Harriet would be taken to the nearest hospital, which would be the Derby Royal Hospital.

It was a very hot day and we had no option but to travel from Derby to Nottingham, it was an extra 10 minutes, but were concerned that we did not have the option of a blue light or siren, should we get caught in traffic .

We arrived at the QMC and went straight into children`s accident and emergency department, Harriet was checked in and seen almost straight away. The doctors quickly assessed Harriet, but were not quite sure what was going on with her and therefore said Harriet would need to be admitted to ward E-39, which is the QMC`s neurological children’s ward  .

The nurses made Harriet comfortable and then Harriet was seen by one of the neurological registrars on the ward. The consultant noted that Harriet was jerking and jolting, but could not confirm whether Harriet was experiencing fits or seizures and therefore we were asked if we could leave Harriet on the ward for a few days for observation.

During the second day on the ward Harriet went red in the face and seemed to just lock up, her eyes went like glass and Harriet seemed almost lifeless, we shouted over one of the nurses on the ward and she confirmed that Harriet was having a seizure; a second nurse came over and also confirmed this.

We were quite upset and were not quite sure how to deal with this, but the nurses on E-39 quickly assured us that they deal with this type of thing on a daily basis and said that we should be able to get medicine for Harriet’s ongoing problems, but Harriet would need to be assessed by Dr. William Whitehouse who is Harriet’s consultant neurologist.

Monday morning arrived and we got to the hospital as quickly as we could to see if we could speak to Mr. Whitehouse, but then found that he would not be on the ward until the afternoon, but spoke with staff and other doctors regarding Harriet’s condition, to try and get some further information as to what to expect.

Dr Whitehouse and his team arrived on the ward just after  3.00pm and started to do his rounds,  20 minutes later he got round to Harriet .

We were quite apprehensive as we thought he was going to say something bad was going on with Harriet, but this was not the case, he had looked at the EEG scan results from Derby Royal Hospital and told us that there were no clear episodes of fitting or seizures recorded, which in his opinion was good.

Dr. Whitehouse did witness the jerking and jolting movements on the ward as did the other members of his team, but was unable to see Harriet experiencing any form of fit or seizure and therefore wanted to perform his own EEG whilst Harriet was on E -39 to see whether he could get a confirmed recording on tape .

Other members of the team also looked at Harriet and started to talk with Dr.Whitehouse about further tests that could be done while Harriet was on the ward.

We expressed concerns about Harriet’s current secretion patches, as these were causing soreness to her skin or were simply falling off and the secretions were getting to a stage whereby they were hard to control.

Dr. Whitehouse and his team have decided to try Harriet on a different form of secretion medicine to see if they can control the secretions, without causing the problems Harriet is currently experiencing.

We also asked if it would be possible for Harriet to try a speaking valve while she was on the ward and the team have said that it make sense to try and cover areas  that concern us while Harriet is on the ward .

There are quite a few other tests that the team want to perform on Harriet in a controlled environment and have asked us if we are happy for her to stay in the rest of this weeks for further tests and trials of different medicines that may help to control some of her problems.