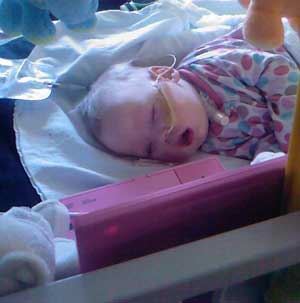 Harriet started to have breathing problems late Thursday night and kept us awake during the night as she needed regular suction from her tracheostomy and nebulizers to help maintain her saturations  .

Harriet also needed long bursts of oxygen to help with her breathing, but she was still struggling .

At about 2.30a.m Friday morning we both got dressed and had to stay awake as we thought we were going to need an ambulance within the next few minutes, but Harriet settled and we both went back to sleep for a few hours .

Lesley wanted to give Harriet her 6.30 am feed but was still worried about Harriet’s breathing as it was very erratic and therefore she decided that she would just give Harriet a smaller amount of food through her NG tube .  Lesley took an aspirate to make sure the tube was in the right place and pulled back a brown type of fluid from Harriet’s stomach, she had never seen this before and was quite worried about it being Blood .

Harriet was still breathing heavily and with the colour being abnormal from the NG tube she decided to call an ambulance, the  ambulance  arrived within minutes and Harriet was taken to the Children’s Accident and Emergency .

The medical team quickly assessed Harriet to try and find out  what  the problem was, they looked at the brown coloured substance from her NG tube and decided to test it for blood, the test was positive Harriet was bleeding internally and more doctors were quickly on hand to help Harriet .

The doctors were concerned that Harriet may be experiencing Liver failure and were very concerned about her well being .  We asked if Harriet was going to die, but the doctors were unable to answer this question and said they needed to run some Blood tests on her and get Harriet into x-ray to determine where the blood was coming from .

Harriet needed fluids and medicine to help stop any further bleeding and the team had to put a line into Harriet`s foot, this took quite a while as Harriet`s veins had been punctured by so many needles over the course of her short life span, but eventually the line was in and she was given the drugs and fluids to help stabilize her condition .

Harriet had her x-ray and the Blood tests were back within the hour, the doctors looked a lot more confident and said that Harriet was not suffering from Liver failure but was bleeding from inside her stomach, but they were not sure what had caused this to happen .

The remaining blood was drained from her stomach through her NG tube and she was then taken onto children’s Dolphin intensive care unit, where she was given anti biotics and oxygen to help control her breathing .

Harriet started to improve within 4-5 hours, although the doctors did not want to give Harriet any food through her NG tube until they were sure the internal bleeding had stopped .

The registrar came onto the ward later that afternoon to examine Harriet and he gave the all clear for her to have a feed, he explained to us that in his opinion Harriet had become distressed, possibly by breathing to hard which had caused bleeding from within her stomach .

Harriet stayed in hospital overnight and was discharged from the children’s hospital with some anti biotics to make sure there was no further infection or trauma .