Harriet`s Recovery From The Spinal Operation

We were told that although Harriet`s operation had gone well, that she was not out of the woods yet and there was a possibility that Harriet may lose more Blood or catch an infection during recovery .

The first two days of Harriet`s recovery were very critical, we were extremely anxious as Harriet`s Heart rate was very high for Harriet and therefore we raised our concerns with the doctors. The  doctors told us that Harriet`s body was full of fluid from the operation and that they needed to flush all this out, her heart rate was high due to the medicines and possibly some element of pain that Harriet maybe experiencing, although she was on morphine to combat the pain .

On the second day doctors decided to try Harriet off the CPAP or the ventilator machine for a couple of hours to see how she would respond, Harriet was able to breathe on her own for a short period of time and was then put back onto CPAP as Harriet now needed to rest .

It now seemed that Harriet was making good progress and although she still looked extremely poorly the doctors were pleased with the progress Harriet had made during short space of time on PICU and therefore they decided to extend Harriet`s time off CPAP to three hours . Harriet had been off CPAP machine for just over two hours, when the nurse noticed Harriet was really struggling to breathe, she called over one of the doctors, they initially examined Harriet and thought Harriet may have a collapsed lung and immediately x-rayed Harriet`s chest . Within minutes of the x-ray, it was confirmed that one of Harriet`s lungs had collapsed and Harriet would now need to go back onto the CPAP machine, as this would put pressure into her lungs and therefore inflate the collapsed lung .

Over the course of the next few days Harriet really struggled to get back to any sort of normality, Harriet`s breathing was very erratic, her blood pressure was dropping and she had developed cold sweats, that none of the doctors could explain .

Mr.Kammeron Hassan, one of the spinal surgeons that performed the operation on Harriet was asked to look at her bandages as they had started to leak blood and fluids, he was happy with how the surgery cuts were healing and helped the nurse to place new bandages on Harriet`s back .

The morphine Harriet was on to keep the pain under control was slowly weaned down to zero as the doctors said that Harriet may become dependent or addicted to the drug as this was one of its side effects and therefore slowly moved her onto another pain killer that had less side effects .

Harriet started to gain strength and was once again on the road to recovery, doctors took another x-ray of Harriet`s chest and decided that is was now safe to remove the large chest drain tube that had been taking excess blood and fluid from Harriet`s chest .  It was just great to see that some of the pipes, that were keeping Harriet alive were now not needed and were starting to be removed from Harriet .

Another few days passed and the consultants decided that they now needed to start getting Harriet off CPAP, as Harriet may become dependent on the CPAP machine breathing for her and there would be a strong possibility that Harriet could be tied to the breathing machine .  The doctors therefore started Harriet on two hours on CPAP and two hours off, this worked well for the first few days and they then decided to keep increasing the hourly rate too what they thought Harriet would be able to manage .

We were still concerned about the cold sweats Harriet was experiencing, Harriet would suddenly go extremely cold and water would poor from Harriet, she was clammy and just did not look right. Doctors performed blood tests on Harriet to see if she had picked something up from the blood transfusion or whether this was simply just a virus, but all tests came back normal and the doctors just had no idea as to what was causing these episodes .

Most of Harriet`s tube and lines had now been removed, her swelling had substantially gone down and the consultant now wanted to test Harriet`s breathing for as long as possible without the assistance of the CPAP breathing machine .  Harriet managed just over twelve hours, before she became tired and the doctors were extremely pleased with this progress .

The following day Harriet was taken off CPAP, but after only three hours off the machine, Harriet started to struggle and therefore the nurse had to place Harriet back onto the CPAP machine in order to give Harriet a rest .

One of the consultant cardiologists had asked the doctors to  scale  down the amount of time Harriet was off the CPAP machine as he was worried that the progress Harriet had made over the course of the last ten days,  would be wiped out and that Harriet would be back to square one . 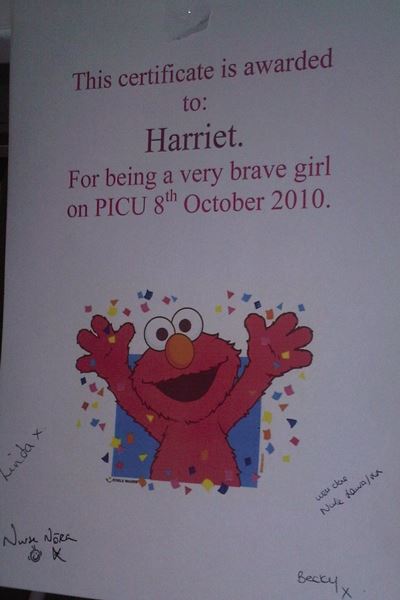 The nurses on the Peadiatric Intensive Care Unit at the Queens Medical Centre in Nottingham, have been great !!  , they are extremely professional and have given Harriet the best  care she could have possibly received and for that we would just like to say a big thank you to them .