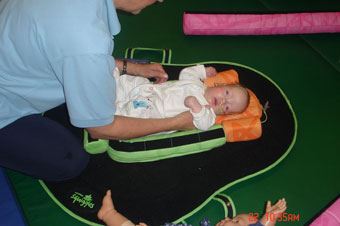 Harriet was booked in to see the physiotherapist as the Derby City Hospital, she had been suffering from a lot of secretions over the last few days as her antibiotics had been changed and therefore we were dubious about how she would react to physiotherapy.

We arrived at the Hospital in the morning and Harriet went straight into her physiotherapy session, it was aimed at being a light programme as the therapist was aware how Harriet struggled with her secretions and breathing last time we went .

Harriet started off with a few slight exercises and straight away secretions started to pool from her mouth and the therapist had to stop to allow Lesley to use the suction machine .  We also had the oxygen ready in the event that Harriet started to struggle with her breathing .

The physiotherapist showed us several light exercises that could be performed on Harriet to help straighten out her curved back that had been caused by months of sleeping on her side .

After the first 20 minutes Harriet settled down well, her secretions started to slow down and her saturation levels got better which allowed her to breathe easier.

The therapist wanted to introduce Harriet to some exercises that required a system called the Squiggles, which were some Velcro shapes that could be pushed together to create a moulded shape to help Harriet with her positioning .

In the first position Harriet was lay down on the squiggle mat with a headrest and had the system attached round the mat . 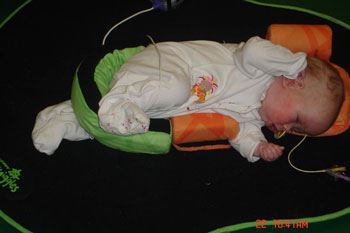 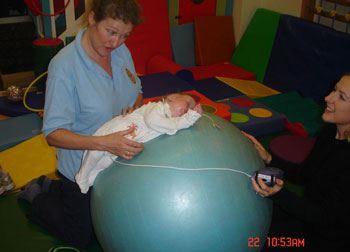 We were then shown  a second position that would keep Harriet aligned on her side when sleeping or feeding, this was a great position for Harriet and she looked really comfortable and calm

The last exercise of the day required a Swiss ball, Harriet was placed on the ball during some stretching exercises .