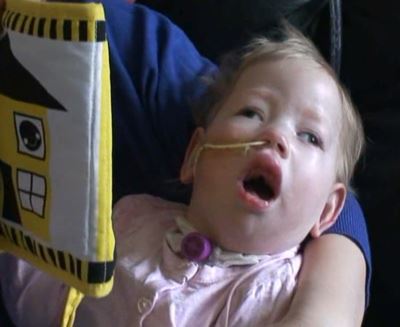 We had not heard Harriet`s voice since her Tracheostomy operation at only 6 weeks old, the only way we could be alerted if Harriet was in distress or needed us, was with her machines .

Over the course of the last 20 months the one thing we had really pushed with the consultants, was to hear Harriet`s voice, we wanted to hear our little girl cry or simply make some sort of noise in order to for us to know that she was happy or sad .

Harriet had been referred to the Ear nose and throat department at the Queens Medical Centre in Nottingham for an assessment of her throat and airway.

We finally received the letter and took Harriet along to the appointment, the specialist put a camera down Harriet`s Tracheostomy to make sure that there were no obstructions and that her voice cords were still intact. The ENT consultant said that everything looked fine and that he was happy for Harriet to try a speech valve, but this would need to be done in the presence of a speech therapist, but she was not in the hospital at this time and therefore we were unable to proceed any further.

As we went home from the hospital with Harriet, we were both very disappointed that the speech therapist was not present during the appointment and now knew that we had to wait for the hospital to contact us in order to arrange another appointment.

The following day we received a phone call from the hospital to say that they could send a speech therapist to our house, but a Kite Team member from the Derby hospital would need to be present, as there could be complications.

A few days later the speech therapist and our Kite Team lady Rebecca, came to see Harriet with the speech valve, we were both very excited but at the same time very apprehensive as we were not quite sure how Harriet would react to the speech valve.

Initially Harriet was a little agitated and we therefore had to wait until she calmed down, we had the oxygen on standby and made sure that Harriet`s oxygen levels and heart rate were at a good level for Harriet .

Harriet`s thermo vent nose was removed from her tracheostomy and then the, Passy – Muir  tracheostomy  speaking valve was placed onto the front of the tracheostomy .  Harriet`s voice suddenly came to life it was very emotional, our little girl who had been silent for nearly 20 months was now able to make some sort of sound, even if it was only for a few seconds .

The speech therapist said that Harriet was only able to cope for a few seconds a day, due to the amount of effort required to make sounds .

We were given the speaking valve and told not to put this onto Harriet`s Tracheostomy more than once a day and then it would be best to stick to 15 – 20 seconds at a time .

The following day we both wanted to hear Harriet`s voice again and decided to get all the equipment ready including the video camera as we could play it back as many times as we liked and this would not affect Harriet .

As the speech valve went back onto Harriet`s Tracheostomy, she suddenly started to make noises again,  it was great to hear her voice, but we were both conscious that we did not want to put Harriet in any danger and only had the speech valve on for a few seconds.

It was very over whelming to here Harriet`s voice and wish this could only be more permanent.

A YouTube of Harriet with the speech valve can be seen on Harriet`s channel   Here!