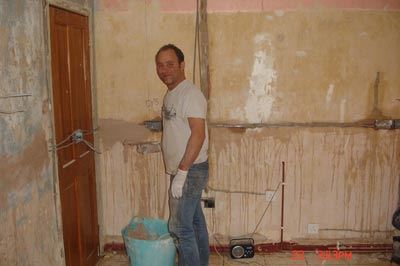 After months of fundraising, we were finally in a position to start looking at how best to start tackling disability alterations to the house that would then merge into Harriet`s new room.

The architect had looked for many different ways to get from the main house into Harriet`s new room, but the only way that made any sense was to go straight through the kitchen window and in turn moving the whole kitchen into what had previously been our dining room .

There were no water pipes, gas main or electricity in the dining room to cater for a kitchen and therefore we slowly started to get all the relevant trade people in, to do the work that would allow us to run a kitchen from the new room.

A door that had been used to go from the dining room into the front lounge had to be boarded up, as the new design meant that the kitchen units would run past the door way.

The electrician was the first to come on site, he advised us that the main fuse box would need to be upgraded and replaced, in order to bring the electrics in the house up to the latest building regulations. This would then allow the electrician to wire in the new kitchen electrics and allow for wiring into Harriet`s new room once it had been built. It was an extremely messy job; most of the ceilings leading back to the fuse box had to be smashed to allow for the new wiring and lighting systems to be installed. 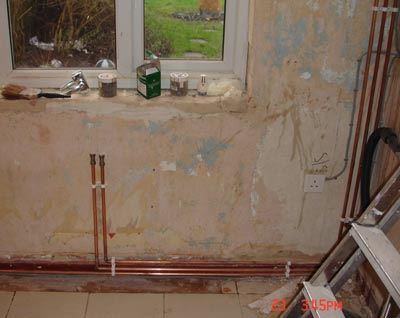 We then had the plumber, he had to remove all the flooring in the upstairs bedroom and landing area, to enable him to merge new water and gas pipes down into the new kitchen area. The pipes were then all positioned in to place and boxed in ready to be connected once the kitchen had been installed.

Once all the electrics, gas and water were in place the ceiling and door were boarded and then room was plastered ready for the kitchen to be installed.

We had wanted to use the old kitchen as it was only a few years old and was in very good condition, but as the new room was larger this meant that it would not fit into the new kitchen area and we therefore had to buy a kitchen that would fit .

The house was now starting to look like a bomb had gone off, there were large holes in the ceiling where the current kitchen was still being used and everywhere just seemed to be covered in dust, no matter how many times we tried to clean it.

We also had the problem of the wall that divided the kitchen from the dining room, this now needed to come down now all the electrics had been upgraded, but would mean new steel would have to be put into place to support the structure of the house. 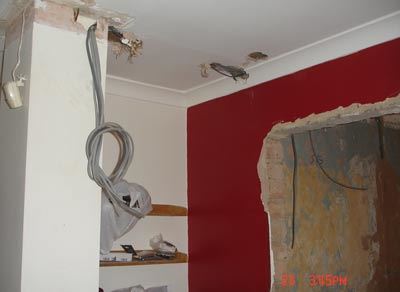 Funds that we had raised for Harriet`s build were now starting to rapidly go down, as we paid each tradesmen in turn for their work.

We had applied for a Disabled Facilities Grant some time ago and had been in contact with them, we explained that Harriet`s condition was not only deteriorating, but life limiting. We were concerned that moving Harriet upstairs and downstairs was getting to a point whereby it was dangerous. At bath times Harriet had to be lowered into the bath by Lesley and again with Harriet`s Tracheostomy and spinal rods, this was simply something we should not be doing.

A letter from Harriet`s consultant neurologist at the Queens Medical Centre in Nottingham, fully supported the need for Harriet`s Disabled Facilities Grant for the new room on the ground floor of the house. The neurologist stated that is was important for Harriet to be in an environment that would meet her complex medical needs and reduce the risk of Harriet being admitted to hospital for things like infections.

The Disabled Facilities Grant team had to look again at Harriet`s case, given the severity of not only her current condition, but also the length of time we had been on the waiting list to hear about a possible grant .

The Grants team had to come back out to the house and look at the plans we had drawn up by our architect. They looked at the house and agreed that Harriet needed a room downstairs and that they would now look to do their own plans as this would be the only way that we could possibly get any funding towards the build.

We were told that if we did get funding that this would cover the main build of Harriet`s room, but it would not cover any alterations costs from the main part of the house.

As we now press on with the main house alterations, we continue raising funds for the main build which will be Harriet`s new room and hope that we are successful in obtaining a grant towards Harriet`s build.

We would like to say a big Thank you, to all of you that have helped raise funds for Harriet`s Trust through Donations or organising a fund raising event and those that continue to support Harriet.

Our main goals are to now get Harriet`s room built in order to give her a better quality of life and then continue to raise funds for stem cell treatment in the hope that we can stop this disease before its too late .

Harriet`s weekend as a Princess
Harriet visits her Great Grandad