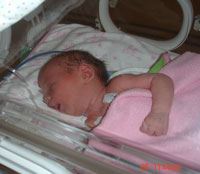 Harriet was born just after two a.m. on the 26th May 2009 by emergency C Section at the Royal Derby City Hospital, which at the time didn’t seem too alarming. However, things changed rapidly when she was passed to her father Jason for only of couple of minutes and was rushed to the Intensive Care Ward.  There was not a lot mentioned at the time, but Harriet’s mother Lesley was soon aware that the normal cry a baby makes just after birth didn’t happen. Lesley and Jason were very concerned at this point and were told that they would be kept in the loop once the doctors had looked at Harriet in more detail.

Jason returned home in the early hours of the morning ensuring mother and baby were as comfortable as possible.  During the next few days Harriet lay in the incubator and doctors could not determine what exactly was wrong with her.  It became apparent that Harriet was unable to suck or swallow and her mouth remained open all the time, making no movement whatsoever.  The team looking after Harriet had to feed her Lesley’s breast milk through a nasal gastric tube, through her nose into her stomach.

As weeks progressed the hospital staff decided Harriet needed an MRI Scan. This proved inconclusive and she was referred to a specialist at the Queens Medical Centre in Nottingham.  For the MRI scan, Harriet had to be put to sleep and due to the complexity of Harriet’s condition she needed a team of eight people in attendance.  Harriet’s stay at the QMC had to be extended by a further four weeks due to complications that arose where she had to be resuscitated.  She also had to have a Tracheostomy to enable her to breath.

Heart rendering problems arose when her Tracheostomy got blocked due to the increased secretions; this reduced the oxygen supply to Harriet’s brain which in turn made her turn blue.  Harriet’s father Jason described the next moment as the sound of a herd of elephants thundering down the corridor with the floor shuddering as though there had been an earthquake...  the crash team appeared and went straight into action to save Harriet’s life.  This happened on more than one occasion and unfortunately, until the right dosage of medication was confirmed, they had the problem of either too much secretion, (where suction was none stop) or the possibility that the secretion dried up too much and hardened around the tube, thus blocking it completely causing her to go blue again due to lack of oxygen. This is still a major problem four months later.

Returning to the City Hospital in Derby, Harriet underwent further tests.  None of the results seemed to pinpoint what was wrong with her - in fact  all the test results came back fine.  Lying in her little bed, it was so distressing to see her constantly wired up to the heart monitor and the stats machine, but without these machines Harriet wouldn’t be here now.

Leaving no stone unturned, Jason and Lesley decided to  contact  the world renowned specialist children’s hospital ‘Great Ormond Street’ in London to see if they would look in to Harriet’s case as the Derby City Hospital seemed to be at a loss as to what was wrong with her.  Thankfully, Great Ormond Street agreed to look at all the test results and case notes on Harriet.  Why Derby City Hospital hadn’t taken the initiative to refer Harriet directly once they had reached a dead end is beyond belief.

Since Harriet was born it’s been a constant rollercoaster of emotions for Jason and Lesley and they still need to make time for their four other children of which two are only 6 and 11 years of age.  There really doesn’t seem to be enough hours in the day. When you have to cope, you have no choice so you just do and the strength you need seems to be sent especially to you.

One of the most frustrating aspects for Jason and Lesley was that the various Doctors they spoke to all seemed to have different conclusions.   It became quite apparent that due to the conversations they had with the Jason and Lesley the Doctors hadn’t spoken between themselves on what to tell the parents.  One consultant spoke to Lesley who advised her to spend as much time as possible with Harriet as he feared she may not survive another couple of months.  To be given this news is like a thunderbolt from hell and as we know we cling to the adage “Where there’s life...there’s hope “.   As the Doctors didn’t even know what was wrong with Harriet, should they have made that comment at all?   We think not.

Arrangements were eventually made for Harriet to come home.  Fortunately Jason and Lesley’s  bedroom  is large enough for it to be transformed into a mini hospital ward with all the equipment required such as cot, camera, monitors, suction aids, feeding aids, oxygen cylinders and bags and bags of medical equipment all of which are carefully stored away. They even had to   transform their double wardrobe into a medical supply unit.  With all preparations made and everything in its place all they needed now was Harriet!  On her first visit home it was for just 6 hours and this proved a very strenuous and testing time. Lesley was not able to leave Harriet’s side as she needed constant supervision.

The Queens Medical Centre eventually sent for her to have the long awaited second MRI scan that could   finally determine what may have been the route cause, but this came up as inconclusive.  The consultant told Lesley and Jason that a large mass of the brain still needed further investigation and would require further tests and these would have to be sent abroad for anyalysis and could take months to come back... but time just isn’t on Harriet’s  side.

Great Ormond Street Hospital looms in just a few days time.  Harriet will be transferred by Blue Light Ambulance accompanied by her Mum and a team of medical staff to take care of any problems that may occur on the journey down.

Count Down To Great Ormond Street