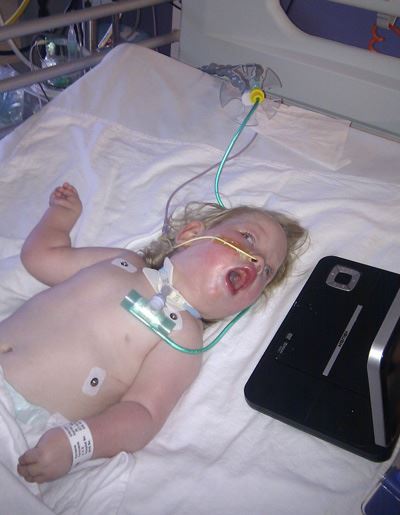 As we arrived at the Derby Royal hospital, Harriet was rushed into the emergency crash resuscitation room, where a team of people were waiting to help Harriet. They hooked Harriet up to their monitors and quickly saw that Harriet needed medication to try and stabilize her condition.

Harriet was given a special nebulizer to open up her airway, this increased Harriet`s heart rate even further and it was very scary to see Harriet in further discomfort. A needle was then inserted into Harriet`s foot, this would stay in place to give antibiotics and other medicines she desperately needed, this was directly into the vein and Harriet`s blood stream.

After several more tests and once the team were happy, Harriet was moved onto the children`s Dolphin intensive care unit, Harriet still looked in distress and we were both very fearful that something was going to happen to Harriet .

The first day on Dolphin seemed to be working, Harriet`s heart rate and oxygen levels, seemed to stabilize and the doctors seemed happy with Harriet`s progress, although they were not entirely sure what caused Harriet to have this set back.

On day two the doctors wanted to try and get Harriet onto a feeding regime and slowly introduced food and explained that this had to be done slowly as they did not want to put any pressure on Harriet`s diaphragm, as this could potentially put her heart rate back up .

Doctors will assess Harriet today, to see if she is still making good progress.

We would like to say a Big Thank you to the Ilkeston ambulance team for arriving so quickly and all those at the Derby Royal hospital, who quickly attended and cared for Harriet .