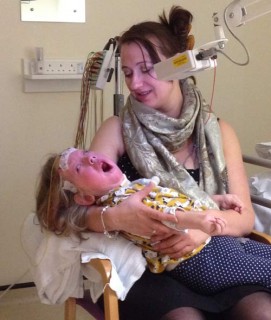 After Harriet`s massive seizure in October, we were concerned that Harriet was now facing a life threatening seizures without having any sort of plan in place.

A few weeks past and Harriet had a fourth seizure; we administered the Buccolam Midazolam, which controlled the seizure while we called for the ambulance. The crew arrived and assessed Harriet, her respiratory count was only 14 per minute and the ambulance crew said it was safer to take Harriet to hospital.

After a few hours Harriet was released from hospital, she spent the rest of the day sleeping off the Buccolam Midazolam medication.

The following day, we asked for an emergency meeting with Harriet`s consultant Dr. Richard Bowker, at the Derby Royal Hospital.

A few days later we took Harriet to see Dr.Bowker and discussed the seizures and the possibility of Harriet going onto an anti seizure medication, in order to control these episodes. Dr. Bowker explained to us that Harriet maybe having little seizures that we were not aware of and referred Harriet for an EEG.

Over the course of the last few years, Harriet had been for EEG scans at Great Ormond street hospital in London, Queens Medical Centre hospital in Nottingham and the Derby Royal hospital, all of which showed there were no seizures taking place.

The referral letter came through in just over a week, we took Harriet to the EEG scan department, where they explained the EEG scan procedure to us as wires were placed around Harriet`s head. A camera was then turned on to record any change in Harriet`s facial muscles, while lights and lasers were shone into her eyes. After about 20 minutes the test was complete and we were told the results would be in within the next 7 days.

It had been just over a week, when we received a phone call from Dr. Bowker, he told us that Harriet`s EEG scan had picked up abnormal brain wave patterns and that she was now susceptible to further seizures.  He went onto explain that it was now a good idea to put Harriet onto an anti seizure medication called Sodium Valporate, which could be started with immediate effect.

We agreed to start Harriet on the new medication, but within a week, Harriet went extremely white and became virtually lifeless. We contacted Dr.Bowker and explained what was happening, he told us that there were some possible side effects with the liver and kidneys and that he wanted to get Harriet tested for these.

Harriet had the relevant blood tests at the hospital, but these had to once again go off to the laboratory for screening and we had to wait for a phone call for the results.

A week later we received another phone call from Dr.Bowker, he told us that the test was fine and that there were no nasty side effects to any of Harriet`s internal organs, from the Sodium Valporate.

We were both pleased that Harriet could continue on the anti seizure medication, but were concerned that Harriet was sleeping alot of the time and therefore asked Dr.Bowker if we could reduce the dose of Sodium Valporate. He told us that Harriet was already on a small dose but agreed to bring it down if this helped make her more aware of her surroundings.

Harriet seemed to respond quickly to the reduced level of Sodium Valporate, she started to be awake alot more during the day and got into a better pattern of sleep during the night.

The weeks went past and we both felt reassured that Harriet was now on a medication that would hopefully control the abnormal brain waves and stop the seizures.

I had decided not to write and blogs for a few months, as I simply did not want to tempt fate and say that things were alot better, it just seemed easier that way.

A few days before Christmas, Harriet had a visit from Santa Claus and Miss Claus, this was really nice for Harriet, and she seemed to enjoy the visit as she looked at both Santa’s. It was a nice quiet Christmas, without any hospital visits, which made a refreshing change.

As we went into January Harriet continued to do well, she had not picked up any nasty viruses and regularly attended the Ivy House School.

January 20th 2014 – Harriet became very restless during the course of the night and continued into the early hours of the morning, she required regular suction and we thought that this may simply be a virus.

Just before 3.30am Harriet`s saturation alarm went off, her oxygen saturation level was dropping significantly and it looked as though she was now having her fifth seizure. We administered the emergency anti seizure medication Buccolam Midazolam and had to call for an ambulance, as Harriet had experienced respiratory failure in October.

The fast response ambulance man arrived, we explained that Harriet was having a seizure and that we had been administered Buccolam Midazolam to control the seizure and that she was also in 4 litres of oxygen. We then gave him the information sheet that explained the respiratory failure due to the combination of Buccolam Midazolam and Rectal Diazepam, which he acknowledged.

Harriet`s breathing was suppressed by the Buccolam Midazolam, but had stopped the seizure in its tracks and she was now going back to sleep.

The ambulance crew arrived about 10 minutes after the fast response man, they were given an overview as to what had happened, as they also looked at Harriet`s respiratory condition.

The ambulance team told us that they were happy to take Harriet to hospital, or if we felt we could manage Harriet at home until the Buccolam Midazolam had worn off, then that was entirely up to us.

We were happy to look after Harriet, but needed reassurance, that her respiratory rate was acceptable and that she would be able to breathe on her own while the Buccolam Midazolam wore off.

The fast response ambulance man told us that Harriet, was stable, but he would stay with us while he filled in his form and that if we still had any concerns, that we could  take Harriet straight to the hospital.

A further 25 minutes past and Harriet became alot more stable, the ambulance man told us that Harriet`s respiratory rate had improved since he had been with us and that he was happy with her recovery. He told us that if anything changed to call the ambulance crew back and that they would take Harriet to hospital.

After an hour we were able to take Harriet off the emergency oxygen and kept an eye on her for the next few hours, to make sure that she could maintain her saturation levels and that she was not going into another seizure.

We are both feeling exhausted, but also very anxious that the anti seizure medication was not doing what it was intended to do.

We will now contact Dr.Bowker about the possibility of increasing Harriet`s Sodium Valporate or possibly changing the medication for something else.