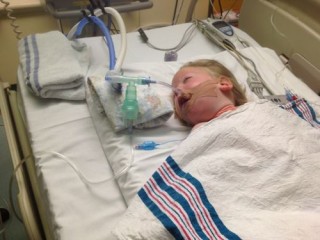 A few weeks after Harriet`s first ever seizure , we met with the neurologist, Dr. William Whitehouse and some of the consultants from the Derby Royal Hospital, who talked about Harriet and to some extent the seizure she had at the end of June. The consultants felt this was an isolated incident that may have been triggered by a virus and therefore told us it was very unlikely that Harriet would have another seizure, given the length of time that had passed.

On August 7th Harriet displayed symptoms of a further seizure, we had been given an anti seizure medication called Buccolam Midazolam and were told to administer through the syringe between the cheek and gums and then rub this in. After a few minutes of doing this Harriet seemed to calm down and we called for an ambulance and went straight to the Children`s accident and emergency. On this occasion Harriet was well enough to be discharged from the hospital within 5 hours and we were happy she was coming home.

August 21stt- Harriet had been awake most of the night and was extremely unsettled, it seemed that she was over stimulated and was unable to sleep.

The following morning, we got Harriet dressed, she had some physiotherapy and then we let her watch some television as normal. After about twenty minutes, Harriet became very quiet and did not seem to respond or be stimulated from watching her favourite television channel, we also tried talking to Harriet, but she seemed unaware we were there.

It seemed that Harriet was now having her third seizure since the end of June, we quickly wired Harriet back up to the saturation monitor and this confirmed that Harriet`s oxygen saturation levels had fallen and that her heart rate had risen significantly.

We thought this seizure may pass, but after 15 minutes we decided to give Harriet the prescribed emergency dose of 5mg Buccolam Midazolam. It took just over 5 minutes for Harriet to respond to the medication; she then started to calm down and slowly drifted to sleep.

It seemed as though the Buccolam had done its job and stopped Harriet`s seizure, we both felt very relieved that Harriet was now calm, but continued to keep an eye on her.

As I was watching television, I noticed that Harriet started to have some sort of involuntary movement, at first it was her leg, but slowly her whole body started to go into what looked like a further seizure.

We were both very upset that Harriet`s medicine had not controlled the seizure and had to call 999 for an ambulance as we now needed to get Harriet to hospital as quickly as possible.

Within 5 minutes of the emergency call the fast response paramedic arrived, he quickly assessed Harriet and asked us a few questions about her condition and whether she had previously suffered any seizures.

We told the paramedic that Harriet had only recently started to suffer from seizures and this was now her third seizure since June.

A few minutes later the ambulance arrived with a further two paramedics, they were quickly updated by the fast response paramedic.

Harriet stopped having the seizure within a few minutes of the second dose of Rectal Diazepam, but then started to struggle with her breathing.

The paramedics put Harriet into the ambulance and wired her up to the onboard saturation monitor and asked if I would like to come in the back with Harriet, as I knew her best.

As we rushed to the hospital by Blue light and siren in rush hour traffic, I was asked lots of questions about Harriet, which were then relayed to the team waiting at the Derby Royal Hospital. We were still a good 5 minutes away from the hospital and Harriet was now really starting to have respiratory problems, I was very concerned as was the paramedic.

We finally arrived at the hospital, Harriet was rushed into the emergency resuscitation room, where she was met by lots of doctors and nurses, I had never seen so many people in an emergency room.

The nurse started to use the oxygen bag on Harriet as the medical team quickly went through all the information they were given from the paramedics. One of the doctors asked me what medication I had given Harriet, the time administered and when the seizure first started.

Harriet was still struggling and one of the consultant anaesthetists took over from the nurse, he tried to use the life support machine, but seemed to struggle to get it to do what it needed to and had to continue where the nurse left off with the oxygen bag.

The consultants seemed to be fighting a losing battle, what would normally take twenty minutes or so, to get on top of Harriet`s problems, now started turning into hours.

The anaesthetist was concerned that Harriet was not getting rid of the carbon dioxide gases from her lungs, due her not being able to exhale by herself. The tracheostomy had a large leak around the edges which was also causing problems with the life support machine.

We were asked to leave the room while the anaesthetist and other consultants, removed the tracheostomy and put a tube down Harriet`s throat in order for the ventilator to keep her alive.

When we returned to the resuscitation room, Harriet looked extremely poorly, the tracheostomy had been removed from her neck and the whole in her neck had been covered with tape. There was also now a large tube, sticking out of her mouth, which the anaesthetist had connected to a life support machine.

The consultants told us that they could only keep Harriet on the ventilator or life support machine for a short space of time, as they no longer supported life support in the children`s part of the hospital.

I was a little taken back by this to say the least, I thought the Dolphin ward was at paediatric Intensive care Unit, but was told it had been downgraded to a high dependency unit, which did not cover those that needed life support.

I could hear the consultants talking to the Queen`s Medical Centre in Nottingham, they were trying to get Harriet onto the Paediatric Intensive Care Unit, but looked as though they were really struggling.

One of the consultants told me that the QMC, had no beds in their Intensive Care unit and that Harriet may have to go to another hospital, which could potentially be anywhere in the country.

I looked at him and then looked at Harriet and felt so helpless, my daughter’s life was now hanging from a thread and there was nothing I could do about. I did not known whether she would be alive in the next hour, or where she would be going to and felt extremely angry that the hospital was now failing my daughter.

Having very little resources at the hospital, I needed someone to contact the Queen`s Medical Centre complaints department on my behalf and asked my mum to do this while I went to try and find some answers.

I reached the hospital offices and asked to speak to someone in senior management, but had to initially talk with a lady to find out what the problem was. As I started to try and explain what the problem was, my mum phoned to say that a bed was now available at the QMC.

It is hard to say whether Harriet being given a bed at Nottingham was a coincidence or whether they feared the backlash, should something happen to Harriet. I was just glad that she had somewhere to go and something positive could now come out of this.

I felt so relieved and found it hard not to cry, as I walked out the offices and made my way back to Harriet.

I was told by the Derby consultants, that the QMC was now sending a team to pick Harriet up and they would be here within the hour.

Things now looked as though they were going in the right direction and Harriet would now have a fighting chance of making it through this life threatening ordeal.

The QMC team arrived; they spoke with the consultants and then asked us some questions about the seizure and what medication we administered to Harriet. They also asked about the medication given by the paramedics and what intervals this was given at.

I explained that we gave Harriet 5mg Buccolam Midazolam and that the paramedic then administered two doses of Rectal Diazepam.

The QMC team then spent the next three hours getting Harriet ready for transportation in the ambulance, to the Paediatric Intensive care Unit in Nottingham.

Harriet arrived in the QMC Paediatric Intensive care Unit in Nottingham, just after 4.30pm, she was then moved to one of the beds and hooked up to a life support system.

The team of consultants, doctors and nurses spent the next 24 hours stabilizing Harriet`s breathing, before removing the ventilation tube from her throat. A new larger tracheostomy was inserted into Harriet`s neck and the life support was then transferred to the tracheostomy.

While Harriet was on PICU in Nottingham, I was able to have a meeting with consultant neurologist Dr. Chow, her registrar and other members of the team, which included a senior Consultant on the PICU ward. I had lots of questions, but what I really wanted to know, was what caused Harriet to nearly die.

Dr. Chow explained to me that the 5mg Buccolam Midazolam, was the maximum dose we could safely administer at home and that sometimes the patient may become over stimulated after giving the medication as this is a known side effect.

I was extremely upset that the medication administered by the ambulance crew not only made Harriet worse, but almost killed her.

The following day Harriet no longer required the life support system and was now only in a small amount of oxygen, which helped maintain her saturation levels. The consultants told us that Harriet was now well enough to return to the Derby Royal Hospitals - Dolphin high dependency ward. An ambulance collected Harriet from PICU and just after 11.30pm, Harriet arrived on the Dolphin ward.

Harriet now looked extremely tired, but comfortable; the consultant on the Dolphin ward told us that Harriet needed to continue with anti biotics, as she had contracted a chest infection. She also needed to rest as they wanted to get Harriet back on all her feeds and medicines.

There was a lot of trauma to Harriet`s airway, which became very prominent when suctioning a constant flow of blood from her tracheostomy.

Over the course of the next few days, Harriet`s temperature came down and her breathing returned to a more normal pattern for Harriet.

The consultant told us that Harriet was well enough to go home, but she needed to continue the antibiotics for the chest infection. He then handed us a letter that needed to be given to any fast response or ambulance crew, which stipulated which medicines were dangerous to Harriet.

We were given a new anti seizure medication called (rectal paraldehyde) , we were told this had little effect on the respiratory system and therefore it was safe for Harriet to take.

As we took Harriet home, it felt such a relief that she had survived this traumatic ordeal, but there were new problems and new challenges that made us feel very anxious about Harriet`s future.

I would like to say a Big Thank you to all the Doctors, nurses and consultants from the Derby Royal Hospital and Queens Medical Centre in Nottingham.

To the anaesthetist we only know his name as TIM - at the Derby Royal Hospital, that stayed with Harriet for over 6 hours and kept her alive until she was able to go to the QMC, a really Big Thank you !