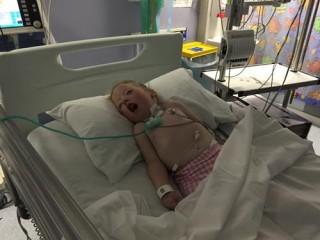 Sunday afternoon started off relatively quiet, the sun was out and I was in the garden with Harriet and Elizabeth. Harriet was relaxing on her swing listening to bird sounds on the phone and seemed to be enjoying being out under the tree .

It was not a particularly hot day, but we were always cautious about Harriet being out in the sun, because she gets burnt very easily. Harriet had only been outside for about 25 minutes when I decided it was probably a good idea to take her into the house, in order to get a break for the sun.

As I picked Harriet up she looked quite white and did not seem to be responding in her usual way, I did not think too much of this at the time and simply thought she was just tired. I put Harriet onto the wedge in front of the television, she continued to look out of it, she was extremely pale, almost white and continued to be unresponsive.

My heart sank, I thought Harriet was dead, I could not feel a pulse, her eyes were closed, she made no attempt to make any noise and more importantly I could not see her chest move.

I rushed Harriet into her bedroom and shouted to Lesley that there was something wrong with Harriet, I was in complete panic, thinking the worst. I attached Harriet to the saturation monitor, it picked up Harriet`s heart beat, but this was extremely low, her oxygen saturations were also showing she was in extreme danger and could possibly die at any given moment.

I phoned for an ambulance, they took down the information and told me that they would get help as soon as possible, I felt relieved that help was on its way. The operator kept me on the phone for probably 5 minutes and then told me that the ambulance would be with me shortly. A further 10 minutes passed and still no ambulance, I was getting extremely worried about Harriet`s well being. The phone then rang it was the emergency services, they asked how Harriet was, again I felt a little taken back and just wanted the ambulance at my house. I asked the operator how long it would be and she replied that as long as no-one has a cardiac arrest, it should be within the next few minutes.

I wanted to tell this operator what I thought about her stupid comment, but had to stay focused on Harriet, she was the one in danger and needed Lesley and myself to be strong for her.

It was 33 minutes since I made the emergency call, when the ambulance arrived with the 2 paramedics, they were very professional and assessed Harriet quickly. The lady paramedic had been to the house before and had dealt with Harriet on a previous emergency call. She told me that Harriet`s respiratory rate was very shallow and that she was concerned for Harriet`s well being.

I did not want to take Harriet into hospital unless we really had to, especially as we had dealt with some of Harriet`s seizures in the past.

The lady paramedic said it was our call, as we knew Harriet best, but I could tell she really wanted to take Harriet into the hospital.

A few minutes later Harriet started jerking uncontrollably, it seemed that the anti seizure medication, Buccolam Midazolam had not worked as well as it had done in the past and that Harriet was now going into another seizure.

This seizure was completely different from the quiet seizure, this was a full tonic-clonic seizure. Harriet could not ordinarily move her arms very far, but this violent seizure had made her arms and legs move in a way that looked like she had been given  high voltage electric shocks.

We helped the paramedics administer the Paraldehyde and waited a few minutes, it seemed this had no effect and the main priority was to now get Harriet to the Derby Royal Hospital, as quickly as possible.

Harriet was placed into the ambulance and we were driven by Blue light all the way, it only took 10 minutes, but felt like a life time.

The ambulance crew parked up and took Harriet straight into the resuscitation room, there were a team of people waiting for Harriet. She was hooked up to the saturation machine, while the doctors and consultants gathered as much information from us as they could. One of the doctors started putting in a catheter, another was looking up what they could give next, while all the other medical staff were trying to find out what they could do to help Harriet.

Harriet was now in 6 litres of oxygen, her seizure had been going over 50 minutes and her heart rate was 221 beats a minute, she was in real danger and there was nothing we could do to help.

The doctor gave Harriet a further dose of Buccolam Midazolam, after 5 minutes this had little effect, they all looked very concerned that Harriet was still having this tonic-clonic seizure, but continued to work on Harriet.

One of the consultants called in the anaesthetist, as the anti seizure medication was not only dangerous in high levels, but he needed someone to take control of Harriet`s breathing and put her into an induced coma, should the seizure continue.

Harriet`s seizure had been going for 1 hour and 10 minutes, when one of the consultants decided to give a further anti seizure medication called Lorazepam  Intravenously. This seemed to start calming down the violent seizure and within 10 minutes, Harriet was out of the seizure and now in a state of calm. Her respiratory rate had become very slow and shallow and needed to be monitored in the resuscitation room.

The consultants, anaesthetists, doctors and nurses looked relieved that Harriet had come out of the seizure.

One of the anaesthetists told us that he would watch over Harriet and assist her breathing while she was getting over the ant seizure medication.

A few hours later Harriet was looking alot more stable, her heart rate was still very high and she was in 3 litres of oxygen, but the seizure had passed for now.

Harriet was transferred to the Dolphin High Dependency unit, where she was monitored for a further 24 hours. The doctors wanted to know what had called the seizure and hoped that the Blood tests would show something, once they were back.

The following day the doctors and consultants came to see Harriet on their ward round, they said that the Blood tests had picked up that Harriet had an RSV virus, which in turn had spiked her temperature to 39.5 C.

The doctors told us that they did not want to let Harriet out of the hospital until they were happy that they had found out what had caused the violent seizure. They went onto say that a temperature of 39.5 C - was extremely high and could cause a seizure in children without any problems and were confident that this was the cause of Harriet`s seizure.

We were told that once Harriet`s temperature was under control and manageable, that we could take her home and look after her while she got over the RSV Virus.

A further 12 hours passed and Harriet had become alot more alert, but more importantly, her temperature was now under control.

We have now taken Harriet home and are keeping a closer eye on her, while she gets over this nasty virus.

We would like to thank the ambulance crew, the doctors, nurses and anaesthetists in the resuscitation room and all the staff on the Dolphin ward.

PROFESSOR VYAS HELPS HARRIET GET READY FOR THE WIN...
Harriets appointment with the Paediatric Neurosurg...