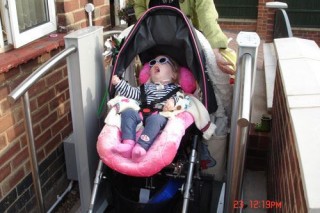 Harriet had been discharged from the Queens Medical Center Hospital in Nottingham at the end of August 2014, she was still very vulnerable and we both knew that she would need a lot of care, but nothing could have prepared us for the months ahead.

A week after Harriet had been discharged from hospital, we had an appointment to see the respiratory professor Harish Vyas and a follow up appointment with the scoliosis nurse Ann Marriot at the QMC in Nottingham.

Harriet`s first appointment was with professor Harish Vyas, we had seen him quite a few times over the last few months with Harriet being in PICU and therefore were not sure if we really needed to be at this appointment.

Professor Vyas told us that Harriet had coped extremely well during and after the operation, he noted that she had only spent a couple of days on PICU. He then asked us if we had any concerns about the wound or Harriet`s general well being.

We told professor Vyas that Harriet seemed to be coping, but at times she presented symptoms of constant sweating and excessive secretions.

Professor Vyas went through all Harriet`s medication with us, before coming over to examine her. He told us that she looked very tachycardia, which may be due to a possible infection or simply Harriet recovering from the surgery in her own way, but wanted to get the wound swabbed for a possible infection.

I thought Harriet was simply displaying symptoms of anxiety and never really thought that there could be a possibility of an underlying infection.

Professor Vyas told me that this was not anxiety, he explained that Harriet was still not right and that it may take some time before we get her back to how she was before the surgery. He then went on to talk about the emergency respiratory plan we had in place, should Harriet start to run into any problems.

We then made our way down to see the scoliosis nurse Ann Marriot, she was pleased to see us and asked if we had any concerns before she looked at Harriet. We told her that professor Vyas had requested a swab sample of the wound, as he was concerned Harriet had contracted an infection or was possibly brewing one, given she was tachycardia.

Anne carefully rolled Harriet onto her side and then gently started to peel the large bandage from the top of her spine, the wound looked extremely red and as though part of it had not joined or healed together.

We were concerned that something was wrong and asked Anne if Harriet`s wound was recovering normally.

Anne told us that the wound did not particularly look infected, but part of it would need to be pulled together with some sterile strips, in order to help the healing process.

Anne then took a swab of the wound and put this in a container for the laboratory, she then cleaned the area, applied the sterile strips and iodine dressing and then added a layer of bandage, including a final water proof patch.

Over the course of the weekend Harriet seemed to be coping alright, her breathing was still a little tachycardia, she had increased mouth and tracheostomy secretions, but we were able to cope with her condition.

Monday morning we returned to see Anne Marriott at the QMC in Nottingham, she told us that that the laboratory had not grown any bugs from Harriet`s spinal swab, which was good news.

Anne had another look at the wound, cleaned it up and then applied a new water proof dressing. She told us that it looked to be healing well, but we must not get it wet and that Harriet would not be able to have a bath until it had healed completely.

A few days after leaving the QMC, Harriet became extremely poorly, she was not only very tachycardia, but now required oxygen at certain times of the day and throughout the night. We started professor Vyas emergency respiratory plan, which seemed to be keeping Harriet stable at times.

There were then other times that we felt we were losing this battle and that Harriet was getting worse, Harriet seemed to need constant mouth and tracheostomy suction throughout the day and most of the night.

I phoned the kite team at the Derby Royal hospital and explained that Harriet`s suction had gone off the chart and that I would be bringing in some saliva samples from her mouth and tracheostomy. I also told them that we were treating Harriet with and antibiotic from her emergency respiratory plan.

The kite team lady told me that the results would be in within a few days and that she would update Dr.Bowker.

After a few days I had to speak with Harriet`s consultant paediatrician Dr. Richard Bowker, from the Derby Royal Hospital, I explained to him what had been happening and that we were concerned that Harriet was not getting better.

Dr. Bowker took onboard my concerns for Harriet`s well being and asked if we could bring Harriet to see him at the Derby Royal Hospital the next day.

We arrived in the Children`s out patient at the Derby Royal Hospital and after Harriet`s weight was taken by one of the nurses, we were called into Dr.Bowkers office.

There were so many things that both of us wanted to tell Dr.Bowker, but how to express all of this was going to be a real challenge, given that all the test results were saying that Harriet was fine.

We told Dr.Bowker that Harriet was displaying severe respiratory problems, which would come and go during the day, at night she would become worse and require oxygen to keep her oxygen saturation levels to a safe level . Harriet would also require a significant amount of salbutamol and other asthma type nebulizers to keep her respiratory system stable.

Dr.Bowker looked quite puzzled by Harriet`s current symptoms and did not have a definitive answer, as to what was wrong with her. He therefore wanted to rule out a chest infection and sent Harriet for a chest X-ray, he told us that these would be in later and that he would give us a call with the results.

As we left Dr.Bowkers office, we seemed no closer to finding out what was wrong with Harriet, neither did we have a real plan on how to deal with the problem.

The following day I had a call from Dr.Bowker, he told me that Harriet`s chest X-ray was clear and that the tracheostomy/mouth secretions had not grown anything either. He thought that it would be a good idea to put Harriet on a course of steroids, given that her body and immune system had been through so much over the last few months.

We followed the plan from Dr.Bowker for the next 5 days, but there was only a mild improvement in Harriet`s condition and we were no closer to finding out what was wrong with her.

Another week had passed and we were still struggling to keep on top of Harriet`s secretions and respiratory problems, it was simply a complete nightmare, with no let up what so ever.

We needed some specialist help to try and resolve this and I therefore decided to give professor Vyas a call at the Queens medical Center in Nottingham.

Professor Vyas told us that one of our main problems, was the secretions running down Harriet`s throat back onto her lungs, he said this agitated  her respiratory system, which in turn was causing a lot of her problems. He went on to say that medicines are not always the answer and that we needed to make sure that Harriet was elevated or sat up in her bed or where ever we had her during the day.

Professor Vyas also told us to get Harriet`s Flu jab in as soon as she was stable enough to have it, as it would give her that much needed protection throughout the virus months.

A week later things seemed to have calmed down a little, but Harriet was still not right, but all I could think about was that Flu Jab.

I rang Harriet`s surgery and asked for Dr.Keeling, I explained Harriet`s problems and that I was concerned she had not had the Flu vaccination. Dr.Keeling was happy to come out and give Harriet and myself the jab, but would only give Harriet the Flu Jab if he thought she was well enough.

A few days later another Doctor from the surgery came out to give the Flu jabs, he had a look at Harriet, but felt she needed a few more days to get on top of her problems, but gave me my Flu jab.

We told the Doctor that we were concerned Harriet would possibly pick something else up without the Flu jab, he took onboard our concerns and said he would report back to Dr.Keeling.

The following week the Dr.Keeling came out to see Harriet, he examined her and then asked whether we thought she was well enough for the Flu jab. We told the doctor that Harriet was still struggling with secretions and needed oxygen at night but was as stable as we could get her at this moment in time.

The doctor agreed to give Harriet the flu jab, but told us she may possibly come down with Flu like symptoms.

It was now  just over a week since Harriet was given the Flu Jab, most of her breathing problems had calmed down and were manageable, she was getting back to being the Harriet we all knew. The Flu Jab or vaccination, seemed to have given Harriet a new lease of life, almost like a silver bullet, that had wiped out the ongoing viral problems from being in hospital.

We are both so relieved that the months of sleepless nights and worrying about Harriet going back into hospital have passed for the time being.

Harriet has gone back to Ivy House School, where they are helping her to cope with her anxiety, together with a structured learning plan for Harriet.