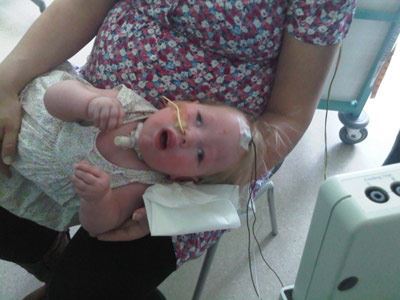 A few days after we had seen the Anaesthetist at the QMC in Nottingham, we received a phone call from the Neurophysiology department at the QMC hospital; they wanted to perform a nerve test that would help monitor Harriet during the operation.

We were a little taken back that Harriet had to go for another test within a very short space of time, but arranged to go back into the hospital on the on the 31st August, which was the following week.

The appointment was 12.30pm and after struggling to park the car we arrived a few minutes late, the lady at the main desk pointed us to the right place and off we went.

Once we arrived on Neurophysiology, a consultant and nurse came down to see us and then asked us to go up onto the next floor where they could perform the relevant Neurophysiology tests.

The consultant performing the tests explained that Harriet needed to be wired up to a machine with electrical probes that would pass a current through certain parts of her body in order to create a response from the nerve pathways in Harriet`s body, this information would be used as a baseline during the operation .

One by one the wires started to go onto Harriet`s head until all the wires were in place, the consultant then introduced an electrical current that was went straight into Harriet`s foot, she increased the current or voltage until she got the response she wanted from Harriet and then printed off a report.

The test lasted about 40 minutes and once all the data was collected, the consultant confirmed she had all the relevant information for Harriet`s operation and that we could now take Harriet home.