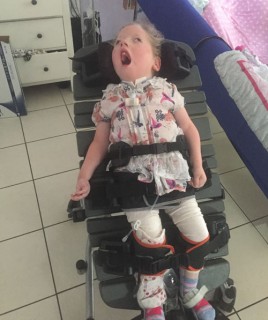 It had been quite a few months since Harriet had been seen by one of her consultants at the Queens Medical Center in Nottingham, but today we had an appointment with her Paediatric Neurologist Dr. William Whitehouse.

It was an early appointment in Nottingham, which meant Harriet had to get ready an hour earlier than she would have done on a normal weekly morning.

The weather forecast for today was going to be one of the hottest days of the year, so we were not looking forward to taking Harriet into an environment that was not only extremely hot, but had no air conditioning.

We arrived at the QMC Hospital in Nottingham, just before Harriet’s appointment at 9.30am and were fortunate enough to find a car parking space fairly quickly. As we walked into the hospital, it felt almost like an oven and Harriet became overwhelmed by the temperature in the hospital very quickly.

Harriet was booked in at the paediatric reception desk, before being called into one of the side rooms, to have her height and weight taken. The nurse told us to wait in the waiting room, until Dr. Whitehouse was available.

After a short period of time in the waiting room, we were called into Dr.Whitehouse office, he welcomed us in and seemed very pleased to see Harriet.

Dr.Whitehouse said it was Harriet’s 7 year review and wanted to make sure that she was on the correct medication, to not only control her seizures, but to also help control muscle stiffness and tone.

After looking through Harriet’s notes, he asked us whether she had experienced or suffered from any further seizures, since her hospital admission in November.

We told Dr.Whitehouse that Harriet seemed to be doing well and had not experienced any further seizures, since starting the new medication Cloberzam, which had been added to support the Kepra anti-seizure medication.

Dr.Whitehouse came over to Harriet and introduced himself to her in order not to frighten her, he then examined her legs, arms and neck for stiffness. He told us that her legs were a lot better since the Botulinum injections, but he was a little concerned that her head was a little floppy.

Dr.Whitehouse then ran through the huge list of medication that Harriet was currently taking throughout the day and decided not to make too many changes. He kept most medicines at the same level, but did increase the daily intake of Tizanadine and Dantrolene.

Dr.Whitehouse told us that he wanted to check the Kepra levels in her blood and also wanted to run some routine blood tests on Harriet’s kidneys and check the vitamin D levels. He said it had been nearly 2 years since the QMC had taken bloods and asked if we would stay in the clinic until a nurse was available to take blood.

It was now getting quite warm in the hospital, but we decided it was best to get this done in one go and said we would wait for the nurse.

Dr.Whitehouse started to write up the bloods for the nurse, but continued chatting, he told us that there was a possibility of us seeing another consultant, when we returned for Harriet’s next review.

I asked him if he was retiring and he told us that he was looking to slowly retire and start doing less at the hospital.

I had mixed emotions as I started to panic a little, this was the man that had helped keep Harriet alive over the last 7 years and was one of the first people we were introduced to at the QMC.I was pleased for Dr.Whitehouse, he was a genuinely nice guy, who would put himself out to help others and has been a real rock to Lesley and myself.

As we left Dr.Whitehouse office, I shook his hand and wished him all the best, but part of me just hoped he would be around for a few more years.

We went over the main desk and handed in the blood form, one of the nurses told us to wait in the main room, until another nurse was available to take the relevant bloods.

We had been waiting about ten minutes, Harriet looked really uncomfortable in the heat and we were about to leave, when the nurse called Harriet’s name. It felt such a relief to be walking into the room, the nurse was able to take all the blood she needed for the tests within a few minutes.

It was now extremely hot in the hospital and felt such a relief to be walking out of the clinic and back to the van.

Harriet is rushed into Accident Emergency after having the Flu Jab