Harriets appointment with the Paediatric Neurosurgeon 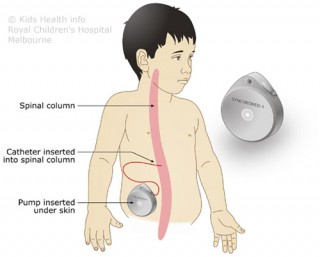 It had only been a few weeks since Harriet was seen by the Neurologist Dr. William Whitehouse at the Queens Medical Center in Nottingham - when we received an appointment from the Neurosurgeon, at the same hospital.

We had received alot of literature about the Intrathecal Baclofen pump with the appointment letter, which explained the procedure, the benefits of the pump and things that could possibly go wrong.

The next few weeks could not come quick enough, we both felt very anxious about putting Harriet forward for something that was so intrusive and were extremely concerned about the things that could go wrong.

March 26th 2015 - today we had the all important appointment with Professor M Vloeberghs, the Paediatric Neurosurgeon, at the Queens Medical Center in Nottingham. Harriet`s appointment was at 10.00a.m and we therefore made sure that we had enough time to park the van and get to the appointment on time.

As we arrived on Ward E40, we were met by a man who quickly introduced himself as Professor M Vloeberghs, he asked us to come into one of the side rooms on the ward, to talk about Harriet.

Professor Vloeberghs had Harriet`s notes in his hands and started asking us what we thought about the Intrathecal Baclofen Pump and whether we had any concerns.

We told the Professor that we had looked over the literature he had sent through and although the procedure looked life changing, that it did also have alot of serious problems if something was to go wrong.

The professor seemed relieved we had genuine concerns about Harriet having this procedure, which did put us on the back foot.

Professor Vloebergh told us that he had pretty much made up his mind that Harriet was not a suitable candidate for this operation, before we arrived - but wanted to see her in person, before making any decision. He then went on to say that that he would not be able to insert the catheter from the Intrathecal Baclofen pump into Harriet`s spine, as the spinal rods from the scoliosis surgery had fused together with the spine. There was the possibility of putting the catheter from the pump at the top of Harriet`s spine, but this carried significant risks of infection.

I felt relieved that Harriet was not being put forward for the Intrathecal Baclofen pump and as I looked at Lesley, I could see her breathe a sigh of relief also.

We told Professor Vloebergh that we were relieved to a point, but were now concerned that Harriet was at the maximum dose of her spasticity medication and that she would wake frequently during the night in pain.

Professor Vloebergh took onboard our concerns, but reiterated his concerns for Harriet`s well being and the fact that this could do her more harm than good.

We both thanked Professor Vloebergh for his time and took Harriet home.

Our concerns are that Harriet will now deteriorate in alot of pain, if we do not find an alternative pain relief for her condition - the consultants are telling us that there is nothing else they can give Harriet to help with the pain.

Although very controversial and also very illegal in the United Kingdom, I am now looking at research on Cannabis Oil, for Neurological disorders and how it can control pain, stop seizures and also help with Spasticity.