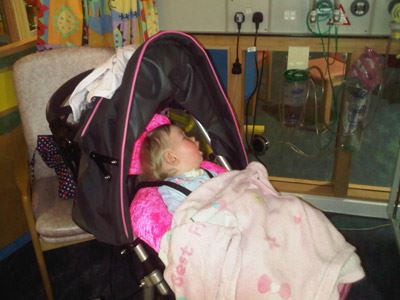 After missing three appointments at the Children`s Royal Derby Hospital, we were finally able to take Harriet to see Dr.Broderick who wanted to make sure that Harriet was still showing some signs of development .

Harriet was initially assessed for her sight, the doctors wanted to know what Harriet could see and whether she was able to track different items with her eyes, the doctor and nurse tried several different toys, but Harriet really struggled as she was very tired by this point in the day.

After discussing how Harriet was and the different types of medications Harriet was taking, the doctor then decided to take a look at Harriet, she was happy that the medication was controlling some of the stiffness, but asked if we would take Harriet for an x-ray on her hips while we were in hospital.

We said that we were happy to take Harriet for an x-ray, but she would first have to go to see the ENT surgeon for the new Tracheostomy.

It was getting towards 12.30am and we had to leave the meeting in order to get onto the ladybird ward as this is where the surgeon would look at Harriet and decide whether she was able to have an up rated Bivona Tracheostomy tube.

It was a bit of a rush, but we finally got onto the children’s ladybird ward just before the surgeon was due to arrive, we got Harriet ready and a few minutes later the surgeon and one of his colleagues arrived. The new tube looked massive, it had a very long flexible hose that would stick out at the front of Harriet`s neck and allow her to breathe allot better and were just happy that this was now going to be fitted as Harriet had been having breathing problems .

After 20 minutes Harriet had settled down, her oxygen levels and heart rate were now back to normal.

It had been quite an eventful morning and we just wanted to take Harriet home as she had already missed a feed, but knew that if we did not take her for the x-ray, then we would have to bring Harriet back at a later date.

As we arrived at the x-ray department, it looked really empty and therefore thought we would be in and out within a few minutes, but not all the information was on hand and we had to wait a good twenty minutes before we could take Harriet in.

Harriet had two detailed x-rays of her pelvis and then it was back in the waiting room, the disk arrived and we were able to take Harriet home after a very long day.

On Monday Harriet will be travelling to the Queens Medical centre in Nottingham, to see her spinal surgeon Michael Grevitt, for a six month assessment.