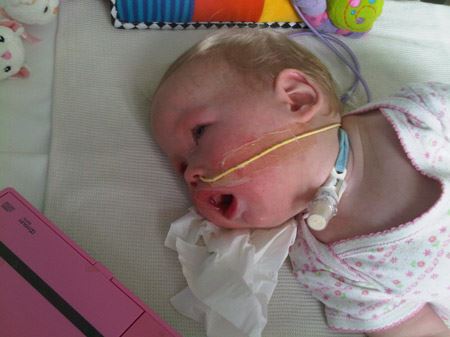 A week before Christmas Harriet had been suffering from increased secretions, to a point whereby she needed regular suction throughout the day and night at 15 – 20 minute intervals at best. We asked the kite team from the Derby Royal Hospital to come out to see Harriet and take some samples from her tracheostomy that would then be tested for bugs at their labs.

The hospital results came back to us four days later, Harriet had contracted a bug that was causing the increased secretions and therefore required an antibiotic called Flucloxacillin. We were extremely concerned about Harriet going onto this antibiotic as she had previously blocked off and nearly died at the Derby Royal Hospital only a few months after she was born, due to her secretions becoming hardened in the tracheostomy.

Harriet has complex neurological problems and  is unable to swallow and therefore receives a medication for her secretions which is called Glycopyrronium, the medicine is administered three times a day with some of her other medicines through her NG tube and has given Harriet a better quality of life .

When Harriet picks up a bug or infection, then her secretions start to spiral out of control, the Glycopyrronium is no longer effective and Harriet needs suctioning around the clock to keep her alive.

We had previously warned doctors at both the Derby Royal Hospital and Queens Medical Centre in Nottingham, that Harriet had previously had a severe reaction to the combination of Glycopyrronium and Flucloxacillin. It seemed that none of the experts could explain why Harriet`s Tracheostomy would block off to a combination of these two entirely different types of medicines, but took on board what we were saying and removed the Glycopyrronium in order to continue with the Flucloxacillin and a new Hyoscyamine secretion medicine patch was added to help control Harriet`s secretions.

In the build up to Harriet`s spinal surgery, Professor Vyas from the Queens Medical Centre in Nottingham requested that Harriet would now need to go onto a new antibiotic called Azithromycin, this would help control bugs around Harriet`s chest and help maintain her immune system . Harriet`s consultant Neurologist Dr Whitehouse, also from the QMC, put Harriet back onto Glycopyrronium as her secretions were becoming too much for us to manage.

Harriet seemed to get on well with the new combination of Glycopyrronium for her secretions and the prophylactic dose of Azithromycin antibiotic for months, but it seemed we now had very little choice but to give Harriet the Flucloxacillin, if we were to treat the bug she now had.

The first few days we were very apprehensive, Harriet was not particularly looking over poorly, but the combination of the two medicines was having an effect on her breathing patterns, which we monitored very closely. Harriet initially did not struggle with the new Flucloxacillin and we were very pleased with the initial results, the secretions started to calm down and it seemed that Harriet was making a good recovery.

Harriet started the night off quite well, but from 3.am this morning onwards her oxygen levels started to drop to the low nineties, her heart rate was also increased and Harriet was simply very unpredictable.

It was clear that we were now not going to get a good night’s sleep and randomly kept checking Harriet`s saturation monitor, it was still not perfect but had not dropped to the dangerous levels and we simply thought Harriet was having a minor reaction to the antibiotic .

Harriet`s monitor suddenly started to alarm and then stopped, this woke us both and we ran over to see if she was alright, Harriet`s breathing sounded terrible and the dark days of the crash team running into the puffin ward room at the Derby Royal Hospital to revive Harriet, came flooding back to us .

As we tried to suction Harriet`s Tracheostomy, we found that it had become blocked, the catheter simply could not get passed and Harriet was unable to breathe.  Harriet’s monitor suddenly started to alarm again, her oxygen levels were plummeting and Harriet was now in real danger.

It was 6.18 am and we now had to do an emergency Tracheostomy change or Harriet would die, an ambulance would simply take too long to arrive.

After three attempts we managed to get the new Tracheostomy in and Harriet`s airline was now clear, her monitors stopped alarming and now showed that her oxygen levels were returning to normal and that her Heart rate was also starting to come down.

It felt such a relief to know that we had both saved Harriet`s life, but at the same time realized that Harriet still had to finish the antibiotics before we were able to get any real restbite .

Harriet`s Tracheostomy is usually changed once a week to try and avoid this type of life threatening problem from occurring, which usually happens with very little warning.

We have now decided to change the Tracheostomy every other day until the course of antibiotics have finished, in order to try an avoid this from happening again this week .

2010 has been an extremely stressful year for Harriet and us as a family and although Harriet has overcome some major hurdles, we are always vigilant and never take anything for granted.

We hope that 2011 will be the year in which we find someone to transplant the stem cells collected from Harriet`s new brother Michael and  Help us to Help Harriet .