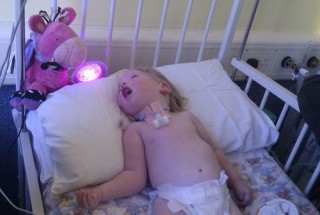 Over the course of the last few months Harriet had been in and out of hospital with breathing problems, that were related to her Nasal Gastric tube moving and causing infections on her chest.

Harriet has developed a very strong sneeze, which we think is a new reflex and that the tube may be causing her some discomfort. The problem with Harriet now having a strong sneeze is that it could be very detrimental to her health; the Nasal Gastric tube has been blown out of position and could potentially pump milk or medicine directly into her lungs.

We always take an aspirate to make sure the tube is located in Harriet`s stomach before any medicine or feed is pumped directly down the feeding tube. If the nasal gastric tube was moved during a feed, then this is something that we would not be able to monitor easily.

On Saturday night we were struggling to get a good aspirate, the nasal gastric tube looked as though it had moved from Harriet`s stomach and therefore the tube would need to be pulled out and threaded back down. We spent a good couple of hours trying to get the tube in place, but the aspirate readings were dangerous and there was no way Harriet could have had her feed or medicines until we were sure everything was safe.

The only option was to take Harriet to accident and emergency at the Royal Derby Hospital, it was now very cold and a few minutes passed midnight.

As we arrived at the hospital, we signed Harriet in and within a few minutes the nurse asked us to take Harriet through into one of the bays. The nurse asked us what seemed to be the problem and we explained the problems we had been experiencing with the nasal gastric tube. 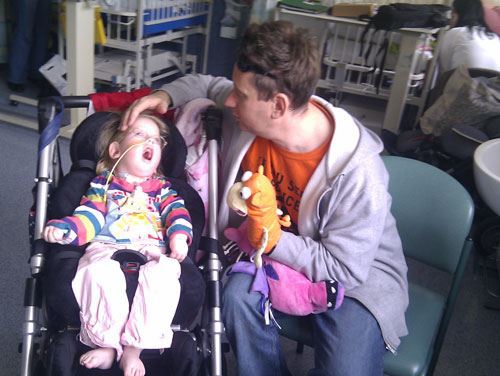 Ordinarily a kite team nurse would take out the tube and fit and new tube, but the nurse seemed reluctant to do this and said she need Harriet`s notes. After an hour the notes arrived and the nurse was able to check the measurement previously recorded which seemed to be right with the tubes current number.

The doctor then came to look at Harriet, he wanted to make sure that the tube was in the right place and sent Harriet for a chest X-ray. The results came back quickly; the doctor looked at them, but was not able to confirm if the tube was in the right place. Harriet`s X-ray was then sent to a senior member of the X-ray team, as this seemed to be the new protocol for the hospital.

An hour passed and we were both really tired, it was now 4.30 in the morning and felt such a relief when we were given the all clear to take Harriet home.

As we drove home completely exhausted, we felt such a relief to know that the tube was located in the right place and that Harriet had not contracted an infection to her chest.

The following day, we seemed be back at square one, the Ph levels for each aspirate were showing that the tube was not located in the right place and once again we could not feed Harriet or dispense her medicine.

We phoned the kite team, they advised us to take the nasal gastric tube out and try and pass the tube down the opposite nostril. This seemed to work and for most of the day Harriet was able to have her feed and medicine.

As Harriet`s last feed was due, we once again had all the problems trying to establish a correct ph level from each aspirate we took and the tube had to be taken out and threaded back down. It was finally a relief to know the tube was in the right place and that we could feed Harriet.

On Sunday morning we had a real shock, Harriet had given back blood from the aspirate we took from the nasal gastric tube located in her stomach and was now bleeding from inside. Harriet had a similar incident a few months ago and therefore rather than take Harriet to the hospital, we alternated her feeds with dioralyte to try and let her stomach repair.

We thought the nightmare weekend with Harriet was over and that she would now return to her normal self, but this was not the case. On Monday morning Harriet`s heart rate became very erratic, to the point where is was raised over 180 beats per minute and Harriet looked in distress. We also noticed that Harriet had milk pooling from her tracheostomy, which was very dangerous, given that this was a sign the milk was coming back up from her stomach and could have very easily gone onto her lungs.

We spoke to the kite team first thing Monday morning and they advised us to contact the Queen`s Medical Centre in Nottingham and explain what had happened.

After a few phone calls we were able to get hold of the surgical registrar, he told us that Harriet needed to be admitted to the ward for observation and if necessary, they may need to operate.

Harriet was in the Queen`s Medical Centre, within half an hour of the conversation, the doctors checked her over, before admitting Harriet to the surgical ward.

The registrar told us surgeon responsible for Harriet, was not in until Tuesday, but this would give them time to have a good look at Harriet`s condition and would relay this to the surgeon.

Harriet`s Surgeon and a team of other consultants examined Harriet, they were concerned that the Nasal Gastric tube was causing her alot of problems and asked for tests to be carried out to establish the best course of action.

This afternoon Harriet had a special dye pumped down her tube and into her stomach, to enable the surgeon to establish whether there was any reflux or problems that may be causing Harriet discomfort. The surgeon seem happy that the Harriet`s stomach was functioning correctly and the reflux was not looking high during this test, but advised that a PH monitoring over a 24 hour period would need to be done to confirm this.

We are now anxiously waiting to find out what the surgeons course of action will be.