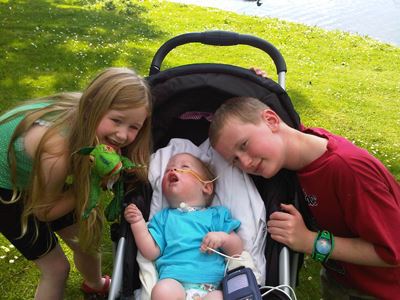 We went to see Harriet`s  spinal  surgeon, Mr. Grevitt for a pre operative assessment on 7th September, but initially had to get Harriet checked in and weighed with the scoliosis nurse to make sure all her information was up to date.

Once we went through to see Mr. Grevitt, he had another good look at Harriet to see how her spine was developing, this entailed Harriet being suspended by her arm pits to see whether her back would straighten .  Harriet was then laid down on the table while Mr. Grevitt pushed down on her spine to see whether there was any movement, but this upset Harriet and he had to stop the tests .

Mr. Grevitt explained to us that Harriet`s spine had become worse in the few weeks since we had last seen him and that he may not be able to straighten Harriet`s spine to make it perfect, but he would do his upmost to make sure that her spine was as straight as possible in order for her lungs to develop .

It then came down to the consent forms for Harriet`s operation, Mr. Grevitt explained to both of us that the operation Harriet was going to have would be one that had many complications and was a very dangerous procedure, with high level risks of Paralysis, life support for the rest of Harriet`s life and even death .

It took a few minutes to sink in what Mr. Grevitt had said and then I signed the consent form that would enable Harriet to have the life saving surgery, but was well aware that this operation could ultimately kill her, Lesley was asked if she would like to counter sign the form, but quickly declined as she was too upset to do so.

Mr. Grevitt then explained to us that Harriet would need to come into the QMC hospital and go onto a ward the day before the operation as they would need to monitor her 24 hour cycle and make sure that Harriet was well enough to proceed with the surgery. Mr. Grevitt then went on to say that as long as there were no disasters within the region or Harriet was poorly, then the operation would take place on September 28th. Harriet would probably go into theatre at about 7.30 am and all being well would go onto a children’s intensive care, 10 to 12 hours later.

We shook Mr. Grevitts hand and then took Harriet onto a ward for Blood tests, these would be used to cross match Harriet`s blood for a possible Blood transfusion during the operation, should she lose too much blood.

It had been a long day at the hospital and then we were finally able to take Harriet home.

We are now trying to avoid catching  colds or viruses that we could pass on to Harriet as we know this would mean that her operation would be cancelled and that the chances of her surviving the winter would be very slim. All our family and friends have been asked to stay away from the house as we are aware that some have been in contact with people with viruses, the house is almost like a quarantine zone for Harriet .

The day before Harriet`s Operation
Harriet visits Neurophysiology for Pre-operative a...