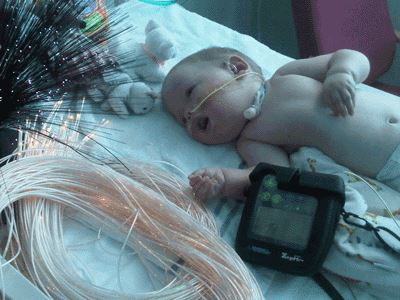 Harriet was admitted to the Queens Medical Centre on Tuesday 29th June, for a 24 hour PH monitoring that would establish whether Harriet required her stomach twisting during the peg operation .

Harriet`s NG tube had to be removed from her face as it had become worn .  Lesley removed the NG tube from Harriet and asked the nurse if she would replace a new one once the lady had placed the PH  monitoring  tube down Harriet’s nose into her stomach .

We then had to take Harriet for an x-ray to make sure that the tube was in the correct place, which took about 40 minutes .  Once back on the ward Harriet had a new NG tube fitted by one of the nurses and then was able to have a feed .

The PH monitoring lady returned and told us that Harriet`s  x -ray had showed that the tube needed to be slightly moved and once this was done the PH test could be started .

Harriet was then monitored for 24 hours, before the tube could be removed which was just in time for her MRI scan .

Harriet was taken to the MRI unit just after 8.30 am the following morning, where she was put to sleep by the anesthetists before the scan could begin .

The MRI scan was booked by Harriet`s neurological consultant DR. William Whitehouse, he wanted to find out whether Harriet`s brain was developing or deteriorating and had asked the MRI technician to perform a full scan of Harriet`s brain .

Dr Grevitt the back surgeon had also requested an MRI scan of Harriet`s back as he wanted a 3D image of Harriet`s  spine  to assess Harriet`s Scoliosis and decide whether he would be able to operate on her spine before the winter months .

Harriet was in the MRI unit for a couple of hours and then sent back onto ward E-39 until the anesthetic had worn off.