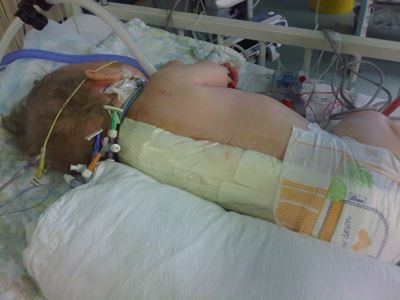 It had now been six months since Harriet had the life saving scoliosis back surgery and it was now time for Mr. Grevitt, to take a look at Harriet.

We arrived at the Queens Medical Centre in Nottingham, just before 10.00 am and went straight to the X-Ray department, where Harriet was given two x-rays on her back.

The nurse then sent us to the spinal outpatients, where we checked in Harriet and then had to wait for a further 30 minutes before we were able to see Mr.Grevitt.

The scoliosis nurse called us in and then Harriet was examined by Mr.Grevitt, he initially looked at Harriet`s spine, he could feel the rod at the top of her spine, but said that this was quite normal and had healed very well as had all the other surgical scars.

We were shown the x-rays that were taken this morning, Mr.Grevitt said that he was extremely happy with how Harriet`s spine was growing and that all the rods and main structure were in place.

Mr.Grevitt then pulled up the x-rays on Harriet`s pelvis that were taken at the Derby Royal Hospital, he looked at them and said that he would like one of his colleagues to look at these, as he specialized in hips. The consultant was in the next room and was able to pop through and take a look at the x-rays. The hip consultant told us that Harriet`s hips were slightly dislocated and that they would need slotting back into place as this was causing Harriet, pain and discomfort .

The surgeons asked us when Harriet was going to have the gastrostomy feeding tube inserted into Harriet`s stomach, rather than continue with the nasal gastric tube .

We both started to say that the letter had not arrived from the Queens Medical Centre to confirm a date for the gastrostomy operation, but then went on to explain that we did not feel comfortable putting Harriet through any further discomfort.

Both surgeons went onto explain that although that Harriet`s current nasal gastric tube or feeding tube was doing the job, but would be causing Harriet some discomfort as it was potentially blocking one of her airways and would always be open to possible infection .

We both decided that it was probably a good idea for Harriet to have the gastrostomy, if it was something that would improve Harriet`s quality of life and therefore asked the surgeons to look into this for us.

The hip surgeon then went on to talk about possible surgery to correct Harriet`s hips, he explained that the operation could be quite a long procedure, even as long as the scoliosis surgery Harriet had only 6 months ago .

As Harriet`s father there was no way that I would ever let this go ahead unless it was a life saving procedure, which is was clearly not and explained to the surgeons that this was not an option at this time and that I felt very uncomfortable about putting Harriet through any more operations .

Mr.Grevitt knew where I was coming from and did explain to both of us that Harriet did very well during her last operation and would probably cope quite well.

This was simply still not an option and both surgeons seemed to sense that hip surgery on Harriet was simply a no go; the hip surgeon said that there were other possible options before they looked at hip surgery and would look at Harriet when she came in for the gastrostomy operation.

As we walked out of the meeting, we were both very pleased that Harriet`s spine was in place and seemed to be growing well, but then came down with a bang, knowing Harriet would have to go in for at least one more operation .

We both love Harriet very much and simply do not want to put her through anymore pain.