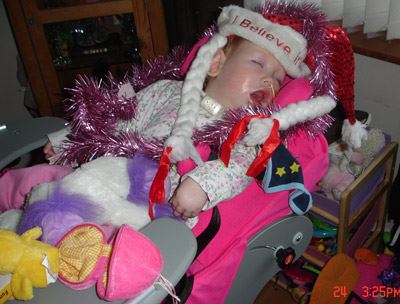 Since Harriet`s scoliosis operation in September, we have been trying to get Harriet a new Sunbeam chair that would keep her spine inline and enable her to have a better quality of life .

The special chair we required was nearly fifteen hundred pounds and was simply too expensive for us to buy for Harriet, but we were made aware that certain charities would be able to help us with the purchase of the new chair.

We were put in touch with the newlife charity, they asked us to fill in a large form and supply them with a detailed report of Harriet`s condition and as to why Harriet needed the special seat .

Harriet`s occupational therapist at the Derby Royal Hospital, Jan Nicholson wrote a letter to support the new chair and after three weeks we received a letter from Newlife to say that Harriet`s grant application for the chair had been successful and that the chair had now been ordered. 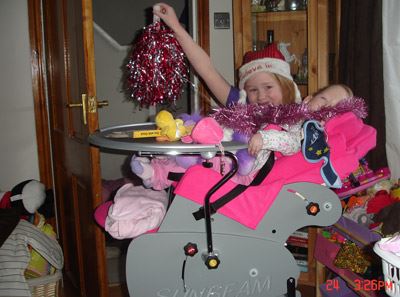 Just before 9.00 am this morning there was a knock on the door, the parcel man asked if we could give him a lift out of his lorry with a very large parcel, we had not ordered anything and had no idea as to what it was.

As we opened the box, it soon became clear, that is it was Harriet`s new chair, we were really pleased that it had arrived so quickly and that Harriet could now sit with us at the Christmas table and look out of the window .

The seat was assembled within a few minutes and when Harriet came downstairs; we adjusted the seat to suit Harriet and then placed her carefully into the chair. Harriet looked really happy and comfortable, all the letters and waiting for the new chair had all been worth the wait and it was simply the best present that Harriet could have received.

We would like to say a big Thank you to Jan Nicholson and everyone at the Newlife Charity, for making Harriet a very happy little girl this Christmas.