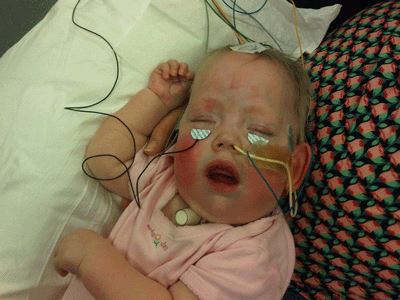 Harriet started off the her stay on ward E-39 with some new blood tests and was booked in with several different consultants during her weeks stay on the ward .

Dr. Whitehouse was initially concerned about the seizures Harriet was experiencing and the jolting movements, but Harriet was not experiencing regular seizures and was therefore given medicine called Tizanidine to help control the sudden jolts, which were thought to be caused by her muscles getting tighter over periods of time .  After a couple of days this medicine got into Harriet’s system and seemed to stop the sudden jolts, we were really happy that something had actually helped Harriet.

Harriet was also given some Glycopromium medicine in replacement to the Hyoscine patches she was on and again after a few days this medicine got into Harriet’s system and started to calm down her secretions, but it is still not perfect .

A lot of the tests involved Harriet travelling to different parts of the QMC hospital in a pram with oxygen and suction .

Although the seizures Harriet had been experiencing had seemed to pass, the consultants wanted to perform their own EEG to try and catch Harriet experiencing a seizure in order to find out what was causing them .

We are virtually positive Harriet can see, but although eye consultants have told us that Harriet’s eyes and nerves seem to be in good condition, there is no way they could tell us whether Harriet could see or not .

Dr. Whitehouse wanted to find out whether nerves in the brain were travelling to Harriet’s eyes and she was therefore sent for a test that involved Harriet being hooked up to a computer with probes all over her head to monitor brain wave activity when provoked by lights .  The test lasted over two hours and was very comprehensive, the consultant eye lady in charge of the test told us that Harriet was reacting to the lights displayed and that this was very encouraging .

After a week of tests had finally come to an end we saw Dr.Whitehouse and his team and they were all happy for Harriet to return home on her new medication .