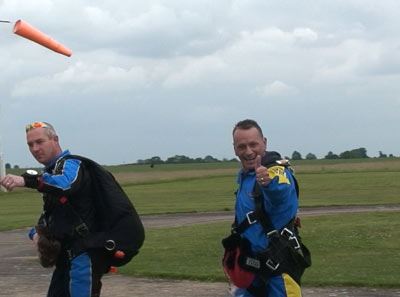 We arrived at Langar Airfield about 8.15am, myself and Harriet`s two brothers..Myles and Ben were clad with warm coats, a flask of coffee and of course the camera and video recorder. We made our way to the reception area. 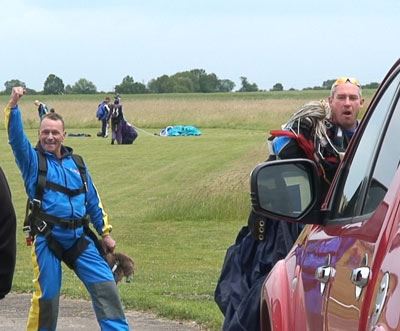 Once we arrived we met John and his partner Sue, drinking a much needed coffee.  John looked so nervous, we tried to reassure him that if he did want to change his mind it wouldn’t be a problem, but John looked into our eyes and said, “No chance... this is for Harriet and I won’t let her down”.

We sat chatting until his name was called about four hours later. Harriet had sent a little pink soft toy for John as a lucky charm which he put into his pocket and would keep it safe. Harriet would not be unable to come along as the distance was too long and her medications could not be administered at the appropriate times.

We watched intently as John dressed into his rather colourful attire for the jump and was given a briefing on how to conduct himself once on the plane and how to jump with the instructor he was assigned to.

Once the plane was air born it seemed to take ages before we saw it again in the clouds... but finally a tiny blob appeared... it was John at last! It seemed like forever as he finally came to land in a field not quite on his target path.

Soon enough John approached us looking so proud, his grin ear to ear... not only completing his quest for Harriet but also achieving and overcoming his fear of heights. 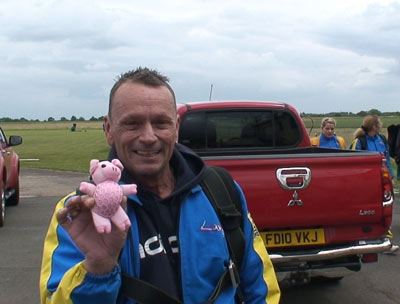 Still clutching Harriet’s little toy he gave it a kiss and held it up to the camera and said “Harriet... I’ve done this for you.”