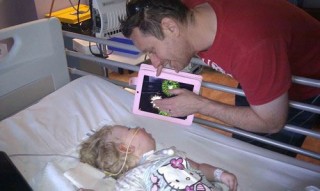 In May 2009 the world as I knew it was turned upside down, nothing could have prepared me for the months of heart ache and pain ahead.

My daughter Harriet was meant to be our fifth and final child, everything seemed very normal leading up to the birth of my daughter, but things quickly went very wrong after she was born.

Doctors handed me our baby girl, but after only a short few minutes, they noticed that something was not right and quickly took her from my arms. Our little girl was struggling to breathe and started to go blue, the doctors were continually suctioning mucus from her nose and mouth, but she was still in distress.

My daughter was then rushed to the children`s intensive baby unit, the consultants were puzzled and were not able to tell me exactly what was wrong with her, or how long it would take to give me any answers. The only thing they knew for sure was that Harriet was unable to suck or swallow.

I felt very numb and found it hard to take in that there was something seriously wrong, as I looked at my daughter in the incubator, I could feel the tears running down my face, there was simply nothing I could do to help her.

My wife was recovering in the baby unit and I needed to go home and try and get some rest, as I drove home in a daze, I remember hearing Metallica – The Unforgiven, on the Radio, it seemed to bring me back to reality and made me burst into tears as I tried to grasp what had just happened to my world as I knew it.

I initially found it very hard to return to the Hospital for the first 48 hours, but my daughter and wife needed me now more than ever.

The team looking after Harriet had inserted a Nasal Gastric tube, through her nose into her stomach in order to give her foods and medicine that in turn would keep her alive.

As the week went on, there was still no news, all we were told is that they were performing, blood tests, chromozone tests and an array of other tests, to try and establish what was wrong with our daughter Harriet.

After the second week, tests were starting to come back, but all seemed to show that there was nothing out of the ordinary; the consultants could only guess as to what was wrong with Harriet.

The consultants at the Derby Royal Hospital, told us that Harriet needed an MRI scan at the Queen`s Medical Centre in Nottingham and that this would also be a good place for her to see a special team of neurologists.

Harriet`s first night in the QMC Nottingham hospital was nearly her last, as she aspirated the milk onto her lungs and had to be resuscitated. This now gave us a clear indication of the severity of the problem and my wife and I were fearful that our daughter would die.

The following day consultants explained to us that is was very important that Harriet had an emergency Tracheostomy, in order for her to breathe; we told them to do whatever they needed to do without really knowing what this involved.

As Harriet returned from surgery a few hours later, we both looked at each other in dismay, as there was now a permanent tube hanging from our daughter’s throat.

The surgeons told us the operation went well and that with proper medical training from the Derby hospital, that we would be able to take Harriet home.

Once Harriet had been transferred back to the Derby Royal Hospital, we spent the next two months with the Kite Team, learning how to look after Harriet`s Tracheostomy and medical needs. The training was very intense and at each stage we had to be signed off, to say that we were both capable of looking after her.

A week before Harriet was able to come home, our house had to be equipped with oxygen, a saturation machine and an array of medical equipment, just to keep Harriet alive.

The next few months were very stressful and had a significant impact on the family unit, simple things like going to the park or shopping, were no longer possible, as one of us had to be with Harriet at all times.

We found that some of our family and friends, drifted away, as we were no longer able to mix in the same circles, going to weddings or other social events was simply not possible with Harriet and we would normally tell people that we could not attend an event, but thanked them for asking us.

Harriet was a child that not only needed our love, but also our care, she would never be able to walk, talk or do any of the things our other children have done and was totally dependent on us, which made us feel very sad.

Anyone that has to look after a disabled child or loved one will know that it is a very lonely life, not only do you have to deal with all the stress and strain of caring for that person, but when you take them out, there will always be the possibility of someone staring at your child. Over time you learn to ignore this and simply do whatever you can to look after and protect your child.

As the months went on, we were continually in and out of hospital, the consultants kept telling us that they did not know what was wrong with Harriet, but told us, her future looked bleak and that we needed to make the most of Harriet. I found this hard to deal with and kept trying to find answers online, it also seemed a good idea to make a diary of events and I therefore I launched a website called helpharriet.org.

Travelling was also a big problem for Harriet as we need to carry oxygen take medical supplies and try and keep Harriet comfortable, I therefore had to sell our family car and take out a large loan to pay for a specialised disable vehicle.

We also had problems moving Harriet from our bedroom upstairs; trying to bathe her was also becoming dangerous as she may get water in her Trachesostomy.

With the help of a Derby solicitor, we set up a discretionary Trust for Harriet and started to raise funds towards a new hospital type room for things that would give Harriet a better quality of life. We were very fortunate that many people from not only Spondon but also Derby and further afield, were able to help us raise substantial funds towards the room.

I had also applied for a Disabled Facilities Grant and was fortunate enough to get this approved and within eight months, Harriet`s new room was built.

My main goals were to make Harriet`s life comfortable and feel that I achieved this with the new car and obtaining funds for her new room, but I still needed to do more, to try and keep Harriet alive.

Harriet had been through so much in such a short space of time, not only had she had an eleven hour, but had picked up a disturbing amount of respiratory viruses, that put her in hospital on a regular basis.

In the first few months we were told that Harriet would not make it to 3 months of age, Harriet is now 3 and although she has alot of problems, she is a little fighter and keeps our spirits up.

I firmly believe that Stem cell surgery is the only way to stop the progressive and degenerative neurological disease, Harriet is suffering from and that is why I must continue raising funds until I am able to find someone to transplant them into her brain, before it is too late.