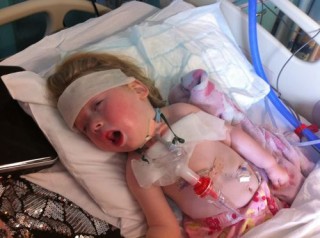 It had been nearly three weeks since Harriet had her Gastrostomy operation at the Queen`s Medical Centre Hospital in Nottingham. The scars were starting to heal and Harriet looked alot better, now that her nasal gastric tube was no longer on her face.

A few days ago things looked as though they may take a turn for the worse, we noticed dark fluids, which looked like blood coming back through the Gastrostomy tube from Harriet`s stomach. We phoned the kite team at the Royal Derby Hospital and asked if they would come out and have a look at the feeding tube. A member of the kite team arrived an hour later, she had a look at the new Gastrostomy tube and told us that it was still healing, but assured us that it looked alright, although she was not familiar with the tube the surgeon had fitted in Nottingham.

The blood continued to back up the new feeding tube and on Sunday, we were concerned for Harriet`s well being and decided that Harriet really needed to see someone at hospital. We took Harriet to children`s Accident and Emergency at the Royal Derby Hospital. We explained that we were concerned about blood in feeding tube, but were told by a nurse that the doctors would not know how to deal with this. To our dismay, the nurse then told us to wait in a room full of children with chicken pox and we therefore decided that this was simply too dangerous for Harriet and had to take her home.

Once we arrived home, we put Harriet in her bed and had to administer oxygen, as she was now starting to display symptoms of respiratory distress. I was extremely angry that we had to take a fragile child out of hospital, before she could be examined by a senior doctor.

We decided to call Accident and Emergency at the Queen’s Medical Centre in Nottingham and explained that we had taken Harriet to the Derby Royal Hospital, but were told that their doctors were simply not trained to deal with a Gastrostomy. The QMC hospital was very surprised by this and told us that we could bring Harriet to them and they would look at her.

It was now late afternoon and we thought that we would probably go to the QMC Monday morning, as Harriet was now very tired and needed to rest.

As the night went on, Harriet started to display significant respiratory problems, she was still on oxygen to help maintain her saturation levels and was given salbutamol to open her airways, but this was only giving temporary relief and we now needed urgent medical assistance.

We called 999 and asked for an ambulance, within five minutes the first response team were with us and helped stabilize Harriet, before the ambulance arrived from the Royal Derby Hospital, which was ironic, given we were at the hospital only a few hours ago.

Harriet was taken to the Queens Medical Centre Hospital in Nottingham, where they quickly assessed and stabilized Harriet, before placing her onto an emergency ward, for further assessment. Harriet was then sent for a chest x-ray, where it was later confirmed that she had contracted some form of chest infection.

At 3am this morning Harriet was moved onto ward D33, the doctors and nurses worked hard most of the morning to stabilize Harriet. One of the doctors noticed that Harriet was displaying worrying signs that could be only be compared to a seizure and made note of this.

In the afternoon Harriet`s Neurologist Dr. William Whitehouse came onto the ward, he asked the other doctors and nurses about Harriet`s current condition. One of the nurses explained why Harriet had been admitted and also about the seizure type episode in the morning.

Dr.Whitehouse asked the nurse and ourselves some further questions, in relation to her current condition and the seizure type episode. He was not convinced that Harriet was having seizures, but wanted to rule this out and has asked for and EEG, which will track brain activity during a suspected seizure.

Dr. Whitehouse then went through Harriet`s medication, before making some changes, which would help to relax her muscles and tone. He then asked us if we had an emergency plan in place, should something happen to Harriet, I immediately told him that this was something I did not want to talk about, as I felt this was negative and was like giving up and saying goodbye to Harriet.

About twenty minutes later, the Gastrostomy surgeon Dr.Brian Davies, arrived on the ward and wanted to know if the nurses had been successful in clearing the blocked feeding tube. The nurse looking after Harriet explained that the tube was now clear and that Harriet could now feed and take medicine through the tube.

Dr.Davies then examined Harriet and told us that the Gastrostomy was healing nicely, the blood coming back from the tube was to be expected and that this would clear up in time.

It felt such a relief that two consultants had now looked at Harriet and none were too worried about her current condition.

Harriet was due to see the respiratory professor Dr.Vyas , at the QMC tomorrow for an outpatient appointment, but we now have been told, he will also go and see Harriet on the ward while she is in hospital.

Harriet is now stable, but still very poorly, she looks completed exhausted from this, but we know that she is now in the right place to receive her treatment and get better.

We would like to thank all the consultants, doctors and nurses at the Queen`s Medical Centre Hospital in Nottingham, for all they have done and are currently doing to help get Harriet well enough to come home.