Professor Vyas gives us some hope for Harriet 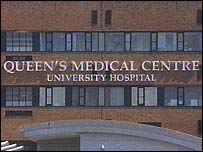 In late November 2012 we went to see the respiratory professor Harish Vyas, at the Queen`s Medical Centre in Nottingham, with Harriet.  We were concerned that Harriet was going to struggle to make it through another winter and that we needed some sort of emergency respiratory plan, should Harriet start to experience problems.

A few weeks later, we were sent a comprehensive plan that was split into three levels of levels of respiratory distress care and what to do should all of these fail.

On Wednesday this week, we went back to see Professor Vyas at the QMC hospital in Nottingham, with Harriet for a review on the new medicine prescribed to help Harriet through the winter months.

We told professor Vyas that Harriet had coped very well over the winter months and had not been admitted to any hospitals since we last saw him in November.

Neither of us wanted to tempt fate by saying Harriet was doing well, but at the same time had to acknowledge that the new medication was helping to control Harriet`s respiratory system and in turn keeping her out of hospital.

Professor Vyas was very pleased that Harriet, was coping better and had adapted well to the Seretide Inhaler and Montelukast tablet, he had prescribed for Harriet on a daily basis.

The Montelukast medication is not normally given to children under four years of age and has not been tested on children. This was something professor Vyas highlighted to us in our last meeting, but we were happy to try anything that would keep Harriet safe.

Professor Vyas then went through Harriet`s current medication including the new Montelukast and Seretide, he decided that they were all fine and that Harriet should remain on all of her current levels of medication. He was also happy to continue Harriet on the Montelukast as she was nearly four and would now come under normal guidelines for this medication.

Harriet had her weight and height taken, before having an examination of her chest and respiratory system.

Professor Vyas was very happy with the way Harriet was maintaining her oxygen saturations and main airways to her chest. He highlighted that Harriet`s chest was filling out well and that we definitely made the right decision, when we put Harriet forward for the scoliosis and kyphosis operation with Mr Michael Grevitt in late 2010.

It was a refreshing change to here a consultant give us some good news about Harriet for once, a bit of hope goes along way.

Professor Vyas asked us if we had heard anything from the geneticist Dr. Suri, that initially looked at Harriet when she was only a few months old.

We told him that we had not seen or heard from Dr Suri or any of his genetic team since we initially took Harriet to see him, when she was only a few months old.

Professor Vyas told us that there was alot going on in the genetic world and that if we were happy, he would write to Dr.Suri and try and get some further tests done, in order to try and find out whether there were any further clues as to what is wrong with Harriet.

The memories came flooding back of when we went to see Dr. Suri and the genetic team, we both initially thought it was for counselling due to us having a disabled child, but quickly found out it was alot more in depth. It was Dr. Suri that referred Harriet to see spinal surgeon Michael Grevitt, who later saved Harriet`s life, so we both owe him alot for his quick intervention.

We both said that we were happy for Professor Vyas to contact Dr.Suri and hoped this would give us some new answers into why Harriet was born this way and whether there was anything we could do to stop this disease or even reverse some of the effects before it was too late.

As we left the office, we had mixed emotions, we glad that Harriet had made some good progress with her respiratory system, but then wondered what would happen with the genetic team.

Harriet is Rushed to Hospital after suffering a Se...
Harriet`s Hand and Foot Splints